What to Know About the Explosion on a London Underground Train

At least 30 people have been injured after an explosion on a London Underground train that police are treating as a terrorist incident.

Counterterrorism police are investigating the explosion, which was caused by an improvised explosive device (IED), that took place during rush hour. Images of a white bucket on fire next to a door are being shared widely on social media, but it has not been confirmed as the device.

The police were called to the scene at Parsons Green station in southwest London on Friday morning. London’s transport authority has extended a suspension of the line that ran through the station. Here’s what we know so far:

The explosion occurred in one of the train’s rear carriages, a reporter for the London daily Metro said. Some were “really badly burned” and their “hair was coming off,” the reporter, who was at the scene when it happened, said according to the Metro.

A passenger on the District line train, which was heading towards central London, said that the packed train suddenly emptied following the apparent blast. He told the news agency PA that those injured appeared to have been hurt in the panicked stampede.

“Suddenly there was panic, lots of people shouting, screaming, lots of screaming, ” he said, according to PA. “There was a woman on the platform who said she had seen a bag, a flash and a bang, so obviously something had gone off.”

“His friend said there was an explosion on the first carriage and a fire, people were hurt and everyone was panicking,” McKay said. “Then our train driver announced there was a major incident. Our train was held on Putney Bridge for about half an hour before reversing back to East Putney.”

How many people are injured?

The Metropolitan Police said in an updated news release Saturday morning that 30 people have been injured.

London Metropolitan Police Assistant Commissioner Mark Rowley confirmed that the device was an IED. He also said that the British Transport Police, the Metropolitan Counter-Terrorism Unit and MI5 were assisting with the investigation by checking CCTV, forensic evidence and witness accounts.

The Met Police says an area 160ft in radius has been evacuated in order to “secure the remnants of the improvised device and ensure it is stable.”

Images and videos of a bucket in a supermarket bag have widely circulated on the Internet, leading some to suggest that it was the IED.

A passenger on the train, Chris Wildish, said that he saw a “device” in the last carriage. “It was a white bucket, a builder’s bucket, in a white Aldi bag or Lidl bag,” he told the BBC. “Flames were still coming out of it when I saw it and had a lot of wires hanging out of it — I can only assume it was done on purpose. It was standing against the door of the rearmost carriage. ” he said.

Who carried it out?

British police said an 18-year-old man has been arrested in connection with the attack, but have not charged him or released his name.

Deputy Assistant Police Commissioner Neil Basu called it a “significant arrest,” in a statement, adding that the investigation is still ongoing and the threat level remains at critical.

Prior to the arrest, London Mayor Sadiq Khan told radio station Leading Britain’s Conversation (LBC) that a manhunt was underway. He was not allowed to say whether that meant a specific person was being sought.

“There are many urgent inquiries ongoing with hundreds of detectives involved, looking at CCTV, carrying out forensic work and speaking to witnesses” Met Police Assistant Commissioner Rowley, who heads national counter-terrorism policing, said in a statement.

What are the authorities saying?

The London Metropolitan Police declared it a terrorist incident after being called to the scene on Friday morning.

“At present we are aware of a number of people who have suffered injuries” police said in a statement. “It is too early to confirm the cause of the fire, which will be subject to the investigation that is now underway by the Met’s Counter Terrorism Command.”

British Prime Minister Theresa May is to chair a high level cabinet meeting this afternoon to discuss the incident. She sent thoughts to the injured commuters and emergency services “who are responding bravely to this terrorist incident.”

London Mayor Khan said he was in contact with the Met Police and emergency services about terrorist incident.

He urged Londoners to remain vigilant and calm and will be taking part in the emergency Cobra meeting with the Prime Minister. “Our city utterly condemns the hideous individuals who attempt to use terror to harm and destroy our way of life” he says. “As London has proven again and again, we will never be intimidated or defeated by terrorism” he said in a statement.

U.S. President Donald Trump denounced “loser terrorists” and suggested that the perpetrators “were in the sights” of the Met Police.

The London Ambulance Service said that multiple resources were on the scene along with six fire engines, 50 fire crew and specialist officers. 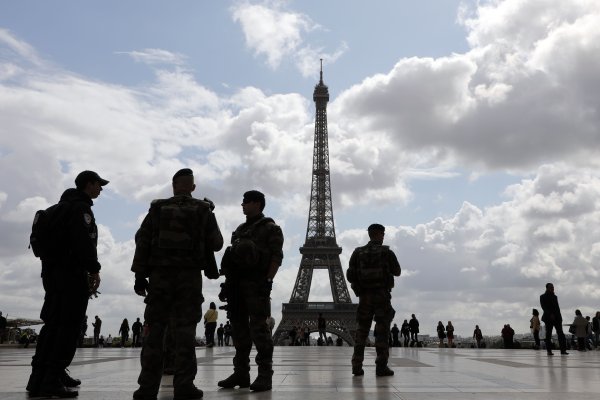 A Man Has Been Arrested After Attacking a Soldier in Paris
Next Up: Editor's Pick