Democratic Senate Minority Leader Chuck Schumer revealed on a hot mic Thursday that he isn’t insecure about what President Trump thinks of him.

“He likes us. He likes me, anyway,” a CSPAN mic picked up Schumer telling someone while the screen showed a shot of the Senate floor, according to a video posted by the D.C. Examiner.

Schumer and House Minority Leader Nancy Pelosi had announced after Wednesday night dinner with Trump that they had reached a deal to replace DACA and enhance border security without Trump’s promised wall. Lately, the pair of Democratic leaders has been working more closely and publicly with Trump.

Trump asserted Thursday morning that the deal was not yet in place, and House Speaker Paul Ryan said they “have not begun negotiations” to replace DACA yet, Politico reports.

As Schumer continued on the hot mic, he seemed to address his statement in light of the GOP follow-up. “Look, what we said was exactly accurate,” he said, and added that “it’s going to work out.”

“Here’s what I told him: I said, ‘Mr. President, you’re much better off if you can sometimes step right and sometimes step left. If you have to step just in one direction, you’re boxed.’ He gets that,” Schumer said on the recording. 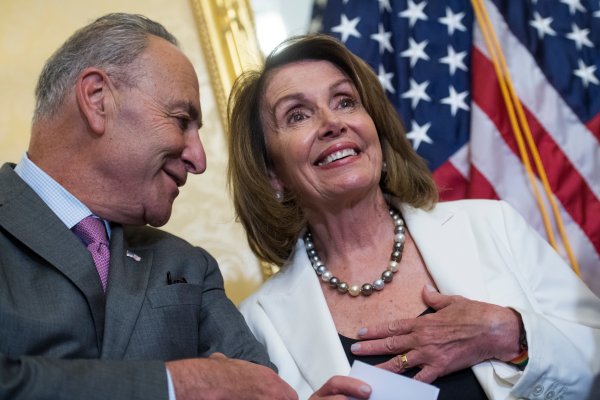 'He'll Go Back on His Word.' Rank-and-File Remain Skeptical of DACA Deal
Next Up: Editor's Pick