Everything You Need to Know About the 2017 Emmy Awards

Get ready for what promises to be a very political Emmys. This year’s host Stephen Colbert has shot up the late-night rankings with his hot takes on Trump, and he likely will use the award show platform to continue to skewer the president. And if Alec Baldwin wins for his Saturday Night Live Trump impression or Elisabeth Moss takes home a Best Actress Emmy for the feminist, dystopian series The Handmaid’s Tale, expect their speeches to build on the themes of their performances.

For bettors out there, the Emmys promise to be more interesting this year than in seasons past. The awards show often loves to honor old standby series. But a number of freshman up-and-comers — including Atlanta, This Is Us, The Handmaid’s Tale, Stranger Things and Westworld — stand a good chance of winning a few awards. Meanwhile, actors like Nicole Kidman and Reese Witherspoon will duke it out for the highest honors — or, more likely, happily hug each other for a perfect red-carpet Instagram moment.

Here’s everything you need to know about Sunday night’s awards.

The show will be airing live on CBS and streaming on CBS All Access. The red carpet coverage starts about an hour prior.

Stephen Colbert could set a record while hosting.

Stephen Colbert could become the first person to win multiple awards while hosting the Emmys. His No. 1 late night program, The Late Show With Stephen Colbert, and his Showtime election-night special won a combined six nominations this year.

Though it was filmed months before Donald Trump was elected, one of The Handmaid’s Tale‘s early scenes eerily mirrored January’s Women’s March. Shows like Atlanta have offered nuanced takes on what it’s like to be black in America today. And nominees Samantha Bee, John Oliver and members of the cast of Saturday Night Live have been regularly lampooning the White House on late-night television. (Baldwin is nominated for his impression of the president on SNL.)

So this year’s Emmys seem ripe for political commentary, especially with Stephen Colbert at the helm. As the comedian told Variety, “The biggest story of the year is not Westworld. It’s not The Handmaid’s Tale. It’s not Milo Ventimiglia’s luscious abs. That’s not what we cared about. The biggest TV star of the year is Donald Trump.”

Game of Thrones wasn’t nominated for any awards.

Game of Thrones aired too late in the summer to quality for nominations this year. The juggernaut show has dominated the drama and actor categories in recent years, and plenty of shows are racing to fill the gaping, dragon-shaped hole it’s left in Emmy voters’ hearts.

Sterling K. Brown could be the first black actor to win Lead Actor in a Drama Since the ’90s.

If Sterling K. Brown wins an Emmy for his performance as Randall in This Is Us, he will become the first black actor to win in that category in 19 years and just the fourth black actor to win that award in Emmys history. (Andre Braugher, who currently stars on Brooklyn Nine-Nine, won the award for Homicide: Life on the Street back in 1998.) Brown has a good chance at snagging the award: He won an Emmy for his role in The People v. O.J. Simpson last year.

Basically everyone in Big Little Lies got a nomination.

The HBO series that began as a sendup of elementary school pickup line drama and turned into a thoughtful meditation on domestic abuse featured an enviable lineup of Hollywood stars. Nicole Kidman, Reese Witherspoon, Laura Dern and Shailene Woodley all earned Emmy nominations for either Actress in a Limited Series (Kidman, Witherspoon) or Supporting Actress in a Limited Series (Dern, Woodley). Alexander Skarsgård nabbed a nomination for Best Supporting Actor in a Limited Series, in addition to nominations for director Jean-Marc Vallée, writer David E. Kelley and the series itself. Our only complaint is that the excellent Zoë Kravitz didn’t get a nod — or a bigger storyline.

The Best Actress categories are stacked.

Kidman will face off against Witherspoon, as well as Carrie Coon (Fargo), Felicity Huffman (American Crime), Jessica Lange (Feud: Bette and Joan) and Susan Sarandon (Feud: Bette and Joan). Many of these actors are simply legends, and Emmys voters have always favored movie stars who lend their talent to the small screen. TIME’s television critic says smart money is on Kidman.

The Best Actress in a Drama category is just as competitive, with Viola Davis (How to Get Away With Murder), Keri Russell (The Americans), Elisabeth Moss (The Handmaid’s Tale), Claire Foy (The Crown), Evan Rachel Wood (Westworld) and Robin Wright (House of Cards) all nominated. And that’s without Game of Thrones’ Lena Heady and Emilia Clarke, who are usually in the mix.

Streaming could win a major coup.

The 13-year-old has been nominated for Best Supporting Actress for her role as telekinetic pre-teen Eleven in Netflix’s Stranger Things. If she wins, she could become the youngest winner of an Emmy ever. Roxana Zal, who won an Emmy for her role in the 1984 TV movie Something About Amelia at age 14, currently holds the record.

Dave Chapelle has already won an Emmy this year (finally).

Despite being nominated twice, the iconic Chapelle Show never won an Emmy. But now its star finally has. Dave Chapelle won the Guest Actor Emmy for his appearance on Saturday Night Live at the Creative Arts Emmy Awards, which honor achievement in animation, reality TV and special presentations a week before the televised event.

So have Melissa McCarthy, Ava DuVernay, Alexis Bledel and RuPaul.

This Is Us could be the first network show to win Best Drama in over a decade.

Tear-jerker This Is Us proved a major ratings boon for NBC. But it also showed that in the era of streaming services and massive cable shows like Game of Thrones, there is an audience who will tune in every week to a network show to watch a family work out its problems. If This Is Us pulls off a win, it will be the first network drama to take home top prize since 24 won in 2006.

Barb from Stranger Things was nominated for an Emmy. (Thanks, Internet.)

Shannon Purser, who played the ill-fated Barb on Stranger Things, rose to meme-fame when the series dropped on Netflix last year. Now, she is an Emmy nominee. Purser landed an unexpected nomination for Guest Actress in a Drama Series. She’s already popped up at the Golden Globes and Comic-Con to feed the fan frenzy, so don’t be surprised if Colbert incorporates a Barb bit into the Emmys. 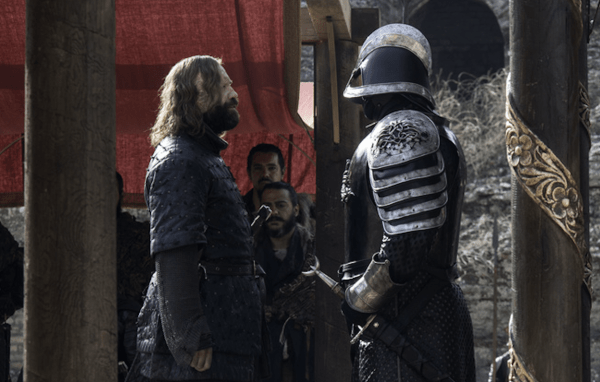 This Game of Thrones Theory May Confirm a Long-Awaited Fight
Next Up: Editor's Pick