Victoria and Abdul Author on the Movie’s Unlikely Story: ‘It Sounds Like a Fantasy'

The first time Shrabani Basu heard of Abdul Karim, she was carrying out research for a book about the history of curry in the late 1990s. A few years later, while on holiday with her family, she came across a painting of Karim in Osborne House, a former private home of Queen Victoria and Prince Albert on the U.K.’s Isle of Wight.

Basu was immediately struck by the fact that Karim — whom she thought was a servant — had been painted “beautifully, in red and gold,” with a book in his hand.

“I knew that Abdul Karim had come from India to England to serve Queen Victoria in 1887, but the portraits told me he’d been painted as a noble man,” Basu tells TIME during a meeting at her literary agent’s office in London in early September. “Later, in Queen Victoria’s dressing area, I saw two pictures: one of the Queen’s confidant John Brown, and below it, Karim. He was obviously someone very special to her.”

Karim’s photos sparked Basu’s curiosity. Who was this young Muslim man from Agra, northern India, at the heart of Britain’s royal court? And what had his relationship with the Queen of England been like?

In 2006, Basu committed herself to researching Karim’s story. The resulting book, Victoria and Abdul: The True Story of the Queen’s Closest Confidant, would take her four years to research and write, and would later be adapted into a movie. That movie, Victoria and Abdul, starring Judi Dench as the Queen and Bollywood fixture Ali Fazal as Karim, opened in limited cities Sept. 22 and expands in the coming weeks.

Basu read through the private papers of the Queen’s household, from letters Victoria wrote to her viceroys, to documents penned by her doctor, Sir James Reid. Reid’s notes revealed that he detested the pair’s unconventional friendship. He described Victoria’s warmth towards Karim as “Munshi mania,” using a word that refers to native language teachers, commonly used at the time of the British Empire.

Windsor Castle granted Basu permission to access the 13 remaining volumes of the Queen’s Hindustani journals, in which Victoria would practice her Urdu, the Hindustani language. Basu noted that the Queen would often sign off notes to Karim, her Urdu teacher, with “dearest mother” or “your loving mother.”

But Basu could not see the whole picture. Many of the letters the pair exchanged had been set alight after Queen Victoria’s death, and her own journals had been edited to remove references to Karim. The “racist” royal household’s accounts were one-sided, Basu says, and Karim’s diaries, frequently referred to with abhorrence by Victoria’s staff, were missing and presumably destroyed.

Basu flew to Agra to search for descendants of Karim, who had no children and died in 1909, just eight years after Queen Victoria. With the help of a local journalist, she found Karim’s grave. “It was such a desolate sight — with stray dogs, graffiti and brambles everywhere,” she says. When Basu eventually tracked down Karim’s home, there was another family living there. They told Basu that Karim’s relatives had left for Pakistan after the Partition — the division of British India into India and Pakistan in 1947. The trail had gone cold.

The first edition of Basu’s book was published in 2010. But she hadn’t given up hope of finding Karim’s family. “I had hit a wall, but I’m not the kind of person to ever think, ‘Oh well, that’s it,'” she says. “I decided that in every post-publication interview I would say that I was still looking for the descendants of this man.”

Within barely two weeks of the hardback’s publication, Basu was contacted by Karim’s family in Bangalore, India. “For years I was hunting that family and when they came forward I realized that friends of mine knew them,” Basu says. “My sister joked that they were hiding under our noses the whole time!”

Karim’s descendants decided to speak out after seeing an interview with Basu, titled “Abdul was no Rasputin,” in a local publication. They told Basu that they had not previously come forward because they had felt ashamed of their distant relation. “The portrayal of Karim in Western biographies is of such a rogue, of someone who manipulated the Queen and got famous. They didn’t want to acknowledge him,” Basu says. “In a way I’ve united them with their ancestor, which is a wonderful feeling. They now know not to be ashamed of him.”

Basu was overwhelmed when the family told her they had in their possession Karim’s original journals — which had long been assumed destroyed. She traveled to meet Karim’s relatives in Karachi, Pakistan, to see the historic documents for herself. “When they were handed over to me, it was an amazing moment,” she says. “There’s a line in one that says, ‘Whoever’s hand this falls into, I hope they like this story.’ And after over a hundred years it had fallen into my hands.”

The journals were remarkably well-preserved, and Basu spent a week translating them while being graciously hosted by Karim’s family in Pakistan. “It was unbelievable that the family had held onto the diaries for so long,” she says. “They had lost everything after Partition; all of Karim’s presents from England, including a tea set gifted from the Russian Tzar and a jewel-encrusted walking stick from the Shah of Iran, had gone. Luckily, someone had the good sense to keep the diary close.”

Basu revised the book for a second edition, and the movie was optioned immediately following its 2011 publication. While some dramatic license has been taken, most of the adaptation is true to the events that took place, Basu says. “Queen Victoria’s staff did bring her a mango from India,” she says, referring to one of the film’s most memorable moments. “Karim told her it would be rotten but she really wanted to try one. Her staff had one sent over, but of course it took six weeks to arrive and went off in the meantime.”

The movie is set during a difficult period in England’s history, the Raj era, a time characterized by imperial oppression for India and Indians. It presents Queen Victoria’s views as unexpectedly progressive, while addressing some of the thornier issues of the time with a fairly light touch — decisions which have drawn some criticism.

But Basu disagrees with those critiques. “I am the last person to like Raj nostalgia. I can’t stand the stuff,” she says. “The thing is, it’s not fiction — it’s fact. Whatever is being shown on screen actually happened — it’s not some cooked-up ‘jewel in the crown’ Raj nostalgia story. This happened. Queen Victoria learned Urdu, she wanted her mango and she stood by Abdul Karim. It sounds like a fantasy, but it isn’t.”

What is important, Basu feels, is for Karim’s story to finally be told. “This was a story [the British] were trying to erase,” she says. “And it’s a very important story to tell. Queen Victoria learned Urdu for 13 years; that’s a big deal, especially these days when you have so much racism around, so much anti-Muslim feeling.”

Basu would like to see Karim’s story on school curricula. “For the first time, there was a young Muslim man at the heart of the royal court,” she says. “It’s never happened before and it’s never happened since. The only way we can go forward from the nasty business of Empire is by celebrating our shared history and heritage, by letting people of the former colonies know that they played a role in this history and that they have an important stake in it. We need to tell these forgotten stories.” 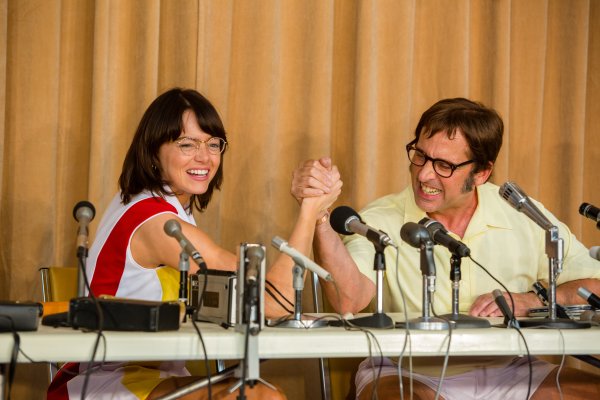 The True Story Behind the Battle of the Sexes Movie
Next Up: Editor's Pick