The Naughty Nineties Set the Stage for Our Reality-TV Presidency

One of the great historical questions is also one of the most difficult to answer: When, precisely, did a given phenomenon, cultural or political, truly begin? Should we date Christianity’s durability to the time of the Passion or, more likely, to Constantine’s conversion? Can we, with Leonard Bernstein, say the cultural liberties of the 1960s came from the spectacular rise of Elvis Presley, with his highly sexualized, taboo-breaking style? Was World War II born at Versailles in the punitive 1919 peace treaty that followed the Great War?

You get the idea. In the unending search to solve the central riddle of our current age–Why Donald Trump?–David Friend, a Vanity Fair editor and Emmy-winning documentarian, has come forward with a fresh view that deftly blends cultural and political analysis. The 45th President, Friend argues in his compelling new book, The Naughty Nineties: The Triumph of the American Libido, owes his place and his power to the world created by the sexualized excesses of the 1990s. “In some ways the victory of Donald J. Trump would never have been conceivable had America not withstood, survived and then assimilated the coarseness of the Naughty Nineties,” he writes. “How else would the electorate have been comfortable with a thrice-married President who had a fondness for fashion models, a history of hosting beauty contests and a string of accusers describing harassment, unwanted advances or assaults (all of whose claims he denied)?”

It’s a pretty convincing–if dispiriting–case. As I read the sprightly book, I kept thinking that we are living in a world that’s largely the product of two titans of the 1990s: O.J. Simpson and Bill Clinton. The rise of the 24-hour news cycle (really a news treadmill), the cultural centrality of character-driven drama and the mainstreaming of inappropriate sexual behavior helped pave Trump’s path to the presidency. In this analysis, Simpson’s Bronco chase on L.A. freeways was essentially the Pearl Harbor of our media-saturated, and media-warped, universe. His trial, with its daily, yea hourly, twists and turns, prefigured the Trump Show of 2016–a show that unfolded, as Simpson’s did, on cable TV. And in the White House, with the discovery of his affair with an intern, Clinton provided a Simpsonized America with a new serial as the decade went on. Trump’s rise and now reign is yet another season: bingey, juicy and addictive.

The very real exception, of course, is that Trump has actual sway over our fates. Simpson had little power over other lives aside from Nicole Brown Simpson’s and Ronald Goldman’s, murders for which he was tried and acquitted. And Clinton, though he had the instincts of an entertainer, was a skilled politician who, for all his personal failings, presided over a largely peaceful and prosperous era.

Perhaps Friend’s most troubling insight is that Americans are, at the moment at least, the problem, not the solution. Trump is President not in spite of who we are but because of who we are–even if many of us don’t want to admit that uncomfortable fact. “Trump was … a horndog, a braggart and a social-media-holic–just like voters were,” Friend writes of 2016. “Trump, unlike the typical public servant, was selfish (and committed to self-preservation)–just like voters, who were bone tired of giving and forgiving.” 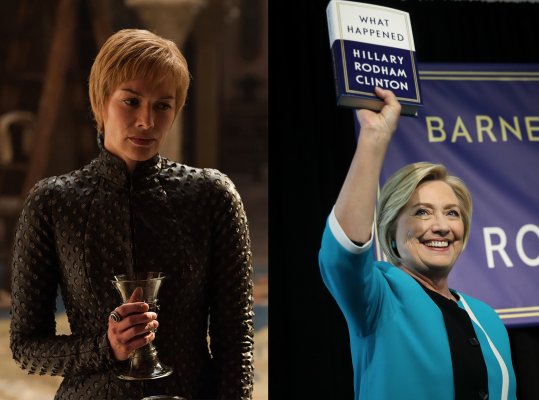 The Game of Thrones-Inspired Reason Hillary Clinton Compared Herself to Cersei Lannister
Next Up: Editor's Pick