Poets and historians have filled thick tomes in attempting to define the modern German character. But Thomas Strerath, one of the image makers behind the re-election campaign of Chancellor Angela Merkel, says he can manage it in only two words: Angst and Gemütlichkeit, or, in rough translation, “anxiety” and “coziness.”

“They go hand in hand,” he told TIME one gray morning in early September, when the roller-coaster ride of Merkel’s campaign was drawing to a close, leaving only the slow and sputtering anti­climax of the vote itself. With her center-right Christian Democratic Union party holding a consistent polling lead of about 15 points over its closest rival, Merkel is expected to sail into her fourth term in office on Sept. 24. The main intrigue left in these elections is over who will serve as the junior partner in her next coalition government.

Things weren’t supposed to be this easy for Merkel. Her decision to welcome hundreds of thousands of refugees from the Muslim world has weighed heavily on her approval rating. One year ago, in September 2016, it hit a five-year low of 45%, according to an ARD-Tagesthemen poll. Voters in the U.S. and Europe, meanwhile, have been in revolt against the Establishment, a trend that went well beyond the British vote in June 2016 to leave the European Union and the election last November of U.S. President Donald Trump. Even on Merkel’s home turf, the far-right party known as the Alternative for Germany, or AfD, gained new support, as did its xenophobic doppelgängers in France, Austria, the Netherlands and elsewhere.

From the German left, the main contender for the chancellorship has been Martin Schulz of the center-left Social Democratic Party, whose popularity in the polls was as much as 17 points higher than Merkel’s when he entered the race in January. “This will be the hardest election campaign I have ever fought,” the Chancellor warned her supporters the following month.

Merkel’s weekly meetings with Strerath began in March. His job, along with other advertising gurus from his Hamburg-based firm, Jung von Matt, was to define the tone and imagery of her campaign. But it seemed to be an awkward partnership.

Although the firm’s roster includes Mercedes-Benz and other high-end clients, neither director Strerath nor his agency had ever worked in German politics before. They are best known around Berlin for a series of viral supermarket ads that feature a man who looks like Santa Claus singing about “super­sexy” produce while, among other things, bathing in a tub of milk.

The firm’s involvement with the campaign thus led to concerns around the Berlin Beltway that the Chancellor—who once described herself as “the girl who ate peanuts and didn’t dance” in high school—was trying too hard to seem cool. But coolness was not what Strerath had in mind. “You cannot abuse your clients just to do something crazy and win an award,” he told me.

In his rumpled T-shirts and designer jeans, Strerath, 51, is hardly the model of a modern political consultant. He started his career in television in the 1990s, right after the fall of the Berlin Wall had allowed the first foreign game shows to appear on air.

He spent this gold rush of the local TV era adapting American staples like Jeopardy! and The Price Is Right for German audiences. It was a nuanced game of cultural translation, and this year he has tried to do something similar with Merkel.

Rather than design a hip new image for the Chancellor, Strerath has sought to make subtle, almost subliminal adjustments to her persona, ones that would make her seem less globalized and more German. The problem, he says, was her global profile.

Germany’s economic power has translated during the Merkel era into a great deal of clout in international affairs, turning the Chancellor into a key decider on everything from the Greek debt crisis to the conflict in Ukraine and the civil war in Syria. (After Trump’s election, many observers crowned her the new “leader of the free world,” a designation she tends to brush away.)

Merkel has not shied from the responsibility that comes with her role in the world, however, even when it has cost her dearly at home. Her response to Europe’s migration crisis is a case in point. By allowing vast numbers of refugees from Syria and Iraq to apply for asylum in Germany in 2015, the Chancellor alienated many of her conservative supporters even as she won accolades abroad for her moral courage and compassion; she was named TIME’s Person of the Year in 2015, in large part because of that decision.

Some Germans, to be sure, have felt empowered by Merkel’s association with global leadership. But many others have winced at the sight of her joining what they perceive to be an elitist club that knows nothing of their own problems. “This feeling around globalization made a retro trend toward nationalism,” says Strerath. “When you are afraid of a complex world, you tend to go into your cocoon. And if you have the feeling that all the decisionmakers are living in this global space, that means they don’t care for you.”

It is among such anti­globalists that the AfD has made its greatest gains, not only by saying that Islam is not welcome in Germany, but also by promising to pull Germany back into its prosperous shell. In the Strerath formula of the German mind, this would be an appeal to that warm and cozy feeling of Gemütlichkeit. He wanted Merkel to undermine the AfD by appealing to that same emotion.

Their first attempt came in August with the launch of her campaign slogan, which was widely derided as clunky and glib: “For a Germany in which we live well and gladly.” Even Strerath admits that it was a mouthful (especially alongside the unpronounceable Twitter hashtag created from its German acronym, #fedidwgugl). But its aim, he says, was to show that Merkel is down-to-earth: neither as lofty as Schulz and the Social Democrats (“Time for more justice!”) nor as steeped in identity politics as the AfD (“Trust yourself Germany!”).

To drive home the point, Strerath pushed Merkel to “steal back” the imagery of the German flag, which the right wing had plastered over its posters. “That was a very difficult discussion,” Strerath recalls. Although it may seem natural to most Americans and, indeed, other Europeans, flag waving is still taboo in mainstream German politics, as are most gestures that invoke the still-sensitive specter of nationalism. It was only after a series of surveys and focus groups predicted a warm reaction from the German public that Merkel agreed to use the national colors—black, red and gold—in her campaign.

In one sense, the move was in keeping with her political instincts. Throughout her 12 years in office, she has shown a martial artist’s touch for turning the strengths of her opponents against them. The tactic, though effective, has earned her a reputation for hogging too much of the political spectrum; in a recent cartoon, the daily Berliner Zeitung depicted the Chancellor as a shapeless amoeba, methodically swallowing and digesting its prey. “She does have this way of using all the oxygen,” Peer Steinbrück, the Social Democrat who lost to Merkel during the race in 2012, once complained to me with a mix of bitterness and admiration.

Schulz would know the feeling. Although the former European Parliament President is still likely to take second place in these elections, his campaign has found it hard to set him apart from Merkel, who has deftly co-opted his policies. At the end of June, for instance, she suddenly veered to the left and announced that she would lift her opposition to same-sex marriage. Although the Chancellor later voted no to placate her conservative supporters, the German Parliament legalized it with an overwhelming majority. Schulz and the Social Democrats had little choice but to go along. Much the same happened to the AfD’s hard line against Muslims. To the astonishment of Merkel’s liberal supporters, she canted to the right in December and called for a ban on full-face veils.

When the votes are tallied in late September, it will be hard to tell which of these swerves won her the most support—or whether any of them were even necessary. Ultimately, it may just be a preponderance of Angst that endears Germans—or resigns them—to the idea of voting for another four years with Merkel. “That is a very big thing in German culture: risk avoidance,” says Strerath. “We are very cautious.” And in a world beset by cataclysms that are often hard to understand, the safest option may be to stay the course—even if it does seem rather boring. 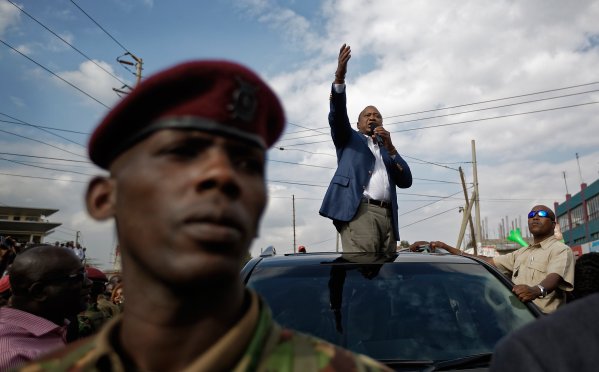 The Saga of Kenya's Disputed Election Is a Good-News Story
Next Up: Editor's Pick