'I Said Goodbye to Everything.' What It Was Like to Live Through Hurricane Irma

It’s just after dawn on Saturday and Miami Beach is empty. There are no tourists picking their way to the surf, no cheery hotel lights, no thumping music from car radios. The air is gauzy. Everything is a ghostly metallic gray.

It’s 14 hours before Hurricane Irma, the biggest storm ever recorded in the Atlantic, is supposed to pass through this spot. The National Weather Service warns it could be the most powerful hurricane in living memory. The Big One everyone’s been waiting for. It could be catastrophic in its devastation, the governor says. The mayor of Miami-Dade County opens a record number of shelters and goes on TV to plead with people to heed mandatory evacuation orders. The circles under his eyes are mauve.

Floridians are tense. People squabble at gas stations over dwindling fuel and throw punches over the cost of plywood. Interstate 75, which runs like a vein down Florida’s spine, is jammed with families trying to get north, to get out. I-95 and the Florida Turnpike aren’t much better. One man turns around at Fort Lauderdale and goes home. “I’d rather hunker down in my house than in my car,” he says.

By the time the rain arrives on Saturday, it almost feels like a relief. Hurricane Irma, the monster storm Miami has been anticipating for a week, is finally here. It comes first in violent bursts that last for a few minutes, then dies away before beginning again, each time more sustained. It’s been four days since the President declared a federal emergency.

But then the hurricane does what hurricanes do: it throws a curveball. It shifts course and turns left. By Saturday afternoon, Hurricane Irma has peeled off the northern coast of Cuba, gathered strength, and is hooking up Florida’s West coast, through Naples and Sarasota, and on up toward Tampa.

No one is prepared for this. Some families on Florida’s Atlantic coast, in Miami and Palm Beach, had evacuated to Tampa. The city now looks like it could be flooded under five feet of water. “What looked like a good idea two days ago might not look like such a good idea anymore,” says Mike Brennan, a hurricane expert at the National Oceanic and Atmospheric Administration.

By 7 p.m., both the National Hurricane Center in Miami and Miami-Dade County’s emergency response offices are on lockdown. No one is allowed to go outside. On the TV, reporters struggle to keep their hoods on. They yell into their microphones and blink rain out of their eyes.

Sunday morning after sunrise, the wind hits with blunt force. Even in the shadow of a building, it’s getting harder to walk in a straight line. The gales come from every direction, pushing the rain sideways, upwards. It feels like entering a drive-through car wash. The gunmetal clouds rotate above, in great, slow, painted arcs across the sky.

At the Aloft hotel in Doral, guests pad down from their rooms to the lobby, which is encased in hurricane-proof glass. A tourist from Argentina, stranded after a Caribbean cruise, takes iPhone videos of the violence outside. Employees lay out pastries for breakfast.

“I said goodbye to everything,” a man sitting in the corner tells a reporter. He is from Boca Raton. He had a boat named Xander. “It’s hard,” he says, his eyes filling with tears. “It hurts.”

Mid-afternoon is when the air starts to growl. The sound is gravelly and thick, like a swarm of Harleys revving their engines. Inside the back entrance at Miami-Dade Fire and Rescue, the security guard yells hello over the cacophony of rain and wind. Outside, everything past a certain distance is a swirling, furious gray. There is no horizon. There is no difference between water and sky and earth.

At some point, someone notices that the roof is leaking, but no one tells the reporters, who spent the night there, their sleeping bags strewn on the floor. “The roof was delaminating,” a firefighter says later. He peels apart his palms to demonstrate.

Sunday evening, Irma curves back from its westward course and, somehow, avoids dropping the full force of her fury on Tampa. Or Naples. It feels too good to be true, like we cheated. Everyone holds their breath. We don’t know enough yet. No one has heard from anyone in the Florida Keys, where the storm first made landfall and it has yet to rake through the north. “It’s not the ones hollering you have to worry about,” the fire chief warns. “It’s the ones you don’t hear from who are in real trouble.”

People in Miami start to go outside. The roads are trashed. Stop signs lie on their backs and shattered streetlights dangle, bobbing just feet above the ground. Cars weave between palm fronds and live power lines, writhing in the wind. Downed trees are everywhere. Some are huge. Their roots, muddy and thick and six feet wide, hang over sidewalks and in front of strip malls. They crush roofs and windshields. People hang out of their windows to take pictures, marveling at the forest of denuded billboards. Stripped of their canvas advertisements, they are strange, hulking pieces of scaffolding. A homeless man who apparently weathered the worst of it emerges from a glass bus stop. Someone tries to get him to a shelter. He takes a Brown Sugar Pop-Tart instead.

In downtown Miami, on Brickell Ave, the streets are under water, four feet in some places. It’s a combination of storm surge and rain and the tide coming in, the meteorologists tell us. They say not to walk in it, but it’s too late for that. Two young women, both barefoot, splash up to their knees. They pose for selfies, combing their hair with their fingers, adjusting bra straps. One climbs onto a fire hydrant, a yellow nub of an island in the flood, and arches her back. Her friend snaps a picture with her iPhone.

Walnut-sized chunks of shattered glass litter the sidewalk in front of an apartment building. A woman who lives there says a balcony on the 43rd story burst that afternoon. It sounded like this, she says, and then she roars. Moments later, there’s a deafening snap overhead—the loudest firecracker you’ve ever heard—and a 10-foot hunk of metal rips off a skyscraper. It falls hundreds of feet and slices into the street. The women go back inside.

By Monday night, the roll call comes in. Miami is okay. Naples is okay, Cape Coral is okay, Sarasota is okay. Tampa is okay. Florida, it appears, is mostly okay.

That’s not to say there is not devastation. Seventeen million people are without power, tens of thousands are still in shelters, and the death toll is already rising. A family is killed in their home after running a generator inside. First responders die in a road accident. A man is killed trying to clear debris off his roof. People start to make tallies: at least 25 people across the southeast have died as a result of Irma, the roads and buildings and bridges will cost $20 billion to fix. In the Florida Keys, CNN’s Anderson Cooper stands in front of a ruined house, interviewing neighbors, their eyes glazed over.

By Wednesday, it gets worse. Eight elderly people from a Broward County nursing home that lost power, and therefore air-conditioning, after the storm are reported dead. The story captures people’s attention, makes them sick. How could this happen? The governor promises to get to the bottom of it.

But still, people are saying it: this is bad, but it’s nowhere near as bad as it could have been. Despite everything, we are lucky. It could have been worse. The phrase becomes a mantra, an apology, an excuse, a prayer. People point at the Caribbean islands, where the death toll from Irma tops 65, where entire cities on Anguilla and the Virgin Islands and Turks and Caicos look, from an airplane, like boxes of spilled matches.

The hurricane experts tell us two things happened in Florida. The state got lucky when Irma’s path shimmied west, and the hurricane lacked a back half. The cities and towns that passed under the Irma’s west side were spared its vicious right hook.

The great cavalry of 30,000 state and federal emergency responders who’d been called to Florida to aid in the recovery post-storm start to look for things to do. Search and Rescue specialists are sent to the Virgin Islands and Puerto Rico. Miami-Dade County Fire and Rescue chief Dave Downey goes home to see his family.

People from Miami Beach line up in their cars, waiting to be allowed back home. When they finally get there, the place is trashed. Stores and restaurants and cars and living rooms and boats are smashed and inside-out. Sodden and ruined. But even here, everyone is saying it. It could have been worse. Doors are propped open, airing out. Someone’s car radio is turned up loud. 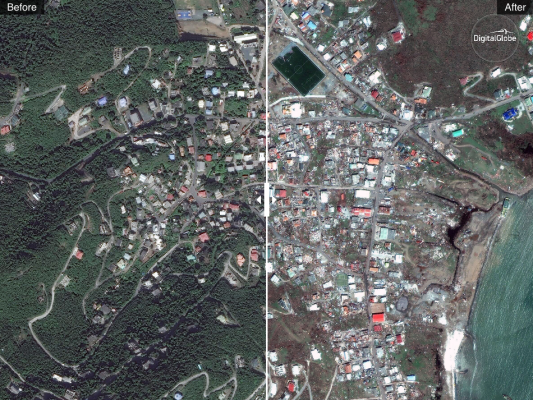 See Stunning Before and After Photos of Hurricane Irma's Impact on the Caribbean
Next Up: Editor's Pick