Jennifer Nettles performs on day one of C2C - Country to Country 2017 festival at the O2 Arena on March 10, 2017 in London, United Kingdom.
Burak Cingi—Redferns/Getty Images
By Dave Quinn / People

She’s not in Nashville anymore, Toto!

After a string of starring roles in musicals like Chicago and Mamma Mia!, Country superstar Jennifer Nettles is joining the ranks of stars reinventing songs from the hit musical Wicked — appearing in the show’s #OutOfOz: Wicked Studio Sessions video series.

PEOPLE has the first look at the 43-year-old Grammy winner’s take on “No Good Deed,” one of two tunes Nettles tackles in the popular YouTube show — which has seen Wicked alums like Idina Menzel, Kristin Chenoweth, Aaron Tveit and more take a new stab at Stephen Schwartz’s songs.

For Nettles, the opportunity to tackle Wicked‘s songs was “a dream come true.”

“I love the music so much,” she told PEOPLE from the set of the shoot. “I first saw Wicked about 11 years ago and I’ve seen it very many times since. Growing up doing theater and loving musical theater, Wicked was a game changer for me. I felt empowered by these two fabulous women at the center of its story, and swept away by these wonderful songs — all of which helped put a different spin on something we all knew, The Wizard of Oz. I just loved it.”

“It still resonates even after this time too,” she added. “So it’s so fun getting to be a part of this.”

In addition to “No Good Deed,” Nettles’ will also be dueting with Tony winner Annaleigh Ashford on Wicked‘s “As Long As You’re Mine” — a love song usually sung between “Wicked Witch” Elphaba and charmer Fiyero.

“Everything just sounds amazing,” Nettles gushes. “These were a bit more re-imagined arrangements. It just offers a little different flavor for these songs that everybody knows and loves. I’m hoping it opens country fans up to musical theater, and people who may not normally be interested in modern popular country music to that. It works both ways.”

Of course, Nettles had long known the power of both. Before finding success as one half of the country duo Sugerland and jumping into her own successful solo career, the singer considered a career on the Great White Way.

“Music being my first love, I went that route and luckily was able to have the success that I did. I’m blessed to have a reentry into the world of theater at a level to work with such fine people and such wonderful productions,” she said, reminiscing about her past roles. “I have a deep, deep respect for the tradition. It takes commitment, but if you’re willing to dig in and do the work, it’s the most rewarding experience.”

She thanks her mother for introducing her to the art in the first place.

“The first album that I actually ever owned was a gift from my mother, and it was Annie — which had just come out as a movie. So it was the soundtrack to that,” Nettles said. “And from there, it was that and the 45s that I first bought myself — ‘Hit Me With Your Best Shot,’ by Pat Benatar, ‘He’s So Shy,’ by The Pointer Sisters, and ‘Do It To Me One More Time,’ by Captain and Tennille. Those four, that was my musical recipe as a singer.”

Now, Nettles is taking a page from her mom’s book and exposing her 4-year-old son Magnus to what the stage has to offer.

“Magnus loves musical theater,” she said. “I want to take him to see Wicked, but so far we’ve done the two Disney musicals that he already knew the movies of — we’ve done The Lion King and Aladdin. And Lion King we even did last year when he was 3½ and we were thinking, ‘Ooh is he going to be able to handle this?’ And he loved it so much that he cried during intermission because he thought it was over!” 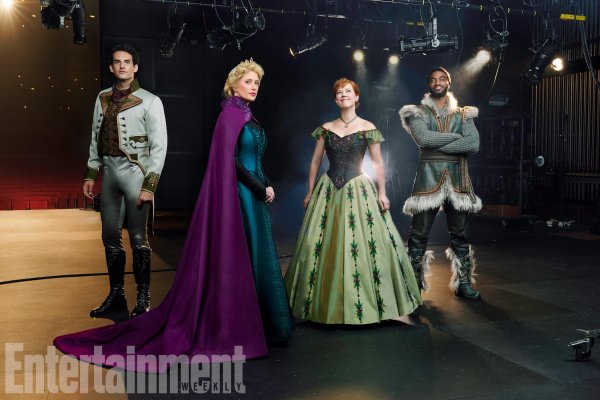 Here's a First Look at the Cast of the Frozen Musical in Costume
Next Up: Editor's Pick