This Caribbean Island Was Evacuated After Irma. Now, the Pets Left Behind Are Going Feral

A fleet of hurricane-battered pickup trucks drives through a desolate, waterlogged street of the Caribbean island of Barbuda. Startled by the noise, dogs emerge from a roofless bungalow and begin to snarl as Zifforah ‘Ziffy’ Tyrell, 29, jumps out of a truck and throws a bucket-full of dog food at the aggressive-looking pack.

“Don’t shoot,” Tyrell says. In a second car, an army officer who is accompanying this rag-tag team of Barbudan animal activists and volunteers had raised his rifle. The soldier nods and Tyrell slowly moves back to the passenger seat of the truck, shouting: “Let’s get going, we have a lot more houses to get to.”

Apart from a dozen army officers, the island of Barbuda is now deserted. Its entire population of around 1,800 was evacuated to its sister island of Antigua days after Hurricane Irma laid waste to their homes, and hours before Hurricane Jose was predicted to make landfall on Sept 9. As aid groups focus on the humanitarian crisis on the bigger of the dual-island state of Antigua and Barbuda, trouble is brewing back on Barbuda.

The hasty exodus has left cats, dogs and herds of livestock bereft of their owners. Local animal lovers like Tyrell and an animal welfare group are now scrambling to stop the island’s hungry animals — especially the hundreds of dogs left behind — from turning feral.

Farmers Shiraz Hopkins (c) and Zifforah ‘Ziffy’ Tyrell inject a horse with antibiotics before feeding it in Barbuda on Sept 11, 2017 in the Caribbean dual-island state of Antigua and Barbuda.
Tara John for TIME

The problem started when Irma’s record-breaking winds flattened the lush island. The Category 5 storm wrapped corrugated iron fencing around palm trees, ripped through roofs and facades on the island’s colorful homes, while also leaving fetid pools of water across the flat landscape.

The island is a health crisis in waiting, say government officials, as the region is vulnerable to mosquito-borne diseases, like Zika. Officials are reluctant to allow locals to return before a cleaning team has cleared the 62-square-mile area.

But without their owners, the dogs are getting hungry. Karen Corbin, President of the Antigua and Barbuda Humane Society, says the dogs will eventually turn on the horses, cows, goats, sheep, pigs and poultry now roaming free across Barbuda’s farmland, as fences and pens have been uprooted or destroyed. The livelihoods of Barbudan farmers are at stake.

Tyrell, who is an Antiguan-British goat farmer, is leading a grassroots effort to soothe the minds of Barbudan pet owners and farmers. “We started a Go Fund Me campaign to help Barbudans with the feeding and immediate care of their pets and livestock” she says. Animal lovers from around the world donated more than $3,000 in a couple days, which helped Tyrell buy enough feed, antibiotics and convince the government that she had a cause worthy enough to access the island.

On Barbuda, the trucks head towards a house at the request of a Barbudan stuck on Antigua, who wants her dogs back. Shiraz Hopkins, 38, a local farmer who is driving the truck, points to two bloated animal corpses near the house’s front door. It’s the pups in question. “The police are shooting dogs they claim to be aggressive,” Tyrell tells Hopkins.

That afternoon the pair inject antibiotics into a donkey that had a festering wound, tend to a racehorse that was grazing in someone’s front yard, pick up a small puppy found next to its dead mother, feed Shiraz’s flock of animals, and provide food and clean water to an endless number of gaunt-looking dogs, including German shepherds, terriers, pit bulls, huskies and mongrels.

While the effort is noble, the dogs have already begun to turn on other pets. Corbin, who had visited the island on the same day at the invitation of the government, noticed half eaten goats and a dead pig. “One of our recommendations is for the dogs to be removed from the island for the health and safety of the other animals,” says Corbin, who will be working with World Animal Protection, a body that specializes in emergency treatment of animals in disaster zones.

Barbuda’s animal issue now needs coordination says Corbin. She commends Tyrell’s group for feeding the animals, but says there needs to be a thought-through process on how they should be evacuated. “If some of the animals are moved to Antigua, the question will be ‘who owns the animals?’” she says. On Tuesday, the island’s Prime Minister Gaston Browne answered those concerns and made Corbin’s team the lead coordinator for Barbuda’s animal rescue-effort.

The island’s clean-up could take anywhere between three weeks to a couple of months. Until then the fate of its animals remains a question. 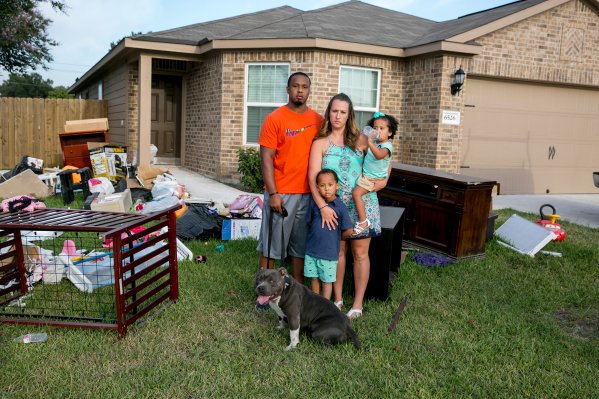 How the Kindness of Strangers Is Helping Hurricane Victims Rebuild Their Lives
Next Up: Editor's Pick