In the Philippines, Human Rights Have a Precise Value: $20

Philippine lawmakers have voted to reduce the annual budget of the Commission on Human Rights — the body tasked with investigating the country’s brutal war on drugs — to about $20.

The move to defund the commission, which was easily passed by Representatives and now awaits approval by the Senate, coincides with another proposal to cut spending on drug rehabilitation programs by about 75%, according to the Philippine Daily Inquirer. The measures are reportedly backed by the administration of President Rodrigo Duterte, whose party controls a majority in both chambers.

The rights commission — which was established in 1987 following the ouster of dictator Ferdinand Marcos — already faces considerable challenges to its mandate. While journalists and investigators have exposed numerous cases of suspicious killings by police, the commission says that only one case has yet reached the court.

Commission chairman Jose Luis Martin Gascon called defunding the body a “capricious display of vindictiveness” by supporters of Duterte, who since taking office last year launched a gruesome war on drugs that has led to thousands of deaths and come under criticism by rights advocates and Western governments.

Meanwhile, the administration’s plan to slash public funds for drug rehabilitation amounts to a $45.23 million reduction in this year’s allocation, according to Reuters, contradicting a public health-based approach to drug addiction advocated by Vice President Leni Robredo.

Duterte, who has said he would “be happy to slaughter” 3 million drug users, has previously questioned the efficacy of rehabilitation. In a speech last August he said that those who had used methamphetamine for more than a year would be “no longer viable for rehabilitation” because their brains had shrunk, according to Reuters. 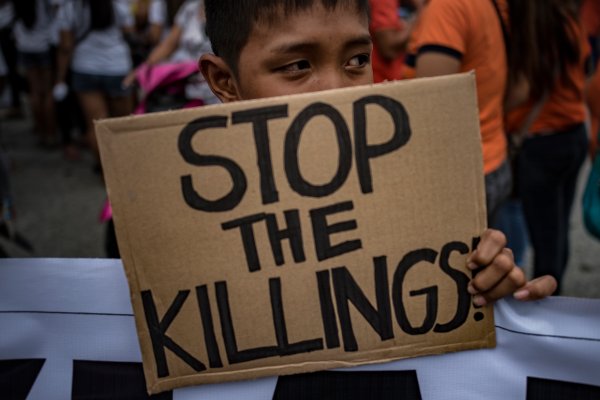