Nicole Kidman may not be great at clapping, but that doesn’t mean she and her Big Little Lies stars didn’t make a statement of general excellence at the 2017 Emmys.

The stars of women-forward drama Big Little Lies are known for having fun on set. So unsurprisingly, solidarity was in the air when Reese Witherspoon, Laura Dern, Nicole Kidman, Shailene Woodley and Zoe Kravitz embraced, cheered each other on, stared into each other’s souls and generally slayed the game at the Emmys.

The miniseries based on Liane Moriarty’s book about moms in Monterey, California took home eight prizes in the limited series categories, including victories for Nicole Kidman and Laura Dern.

And there was Dern perched in the crowd with her Emmy cheering on Kidman who gave a moving speech about spotlighting domestic violence. And here was Witherspoon visibly moved by Kidman as well. The internet loved it.

Ever the turbo mom, Witherspoon took the Instagram’s to share her happiness. 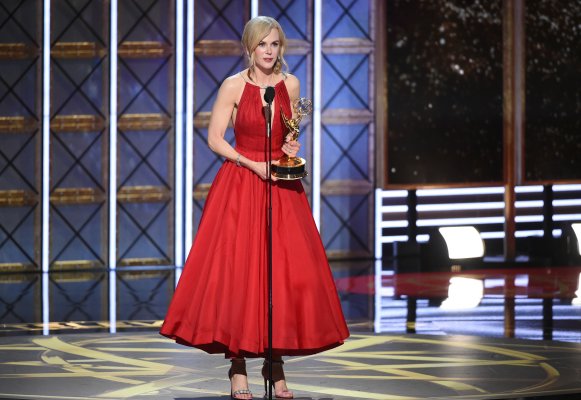 Nicole Kidman Shines a Light on Domestic Abuse in Powerful Emmys Speech
Next Up: Editor's Pick