Ever since Stranger Things burst onto the scene, the cutest kids to ever use walkie talkies became Internet favorites.

So it’s only fitting that when the crew of child actors showed up to the 2017 Emmys red carpet, fans reacted with maximum excitement.

On Sunday night, Finn Wolfhard (Mike), Millie Bobby Brown (Eleven), Gaten Matarazzo (Dustin), Caleb McLaughlin (Lucas), and Noah Schnapp (Will) brought some major star power. The boys gave interviews together, looking collectively dapper in labels like Prada and Ted Baker. “Finn was the best in the movie,” McLaughlin said of Wolfhard’s role in the buzzy horror movie It. Millie Bobby Brown also scored kudos for her princess-like gown, spinning around before running into the show’s creators, the Duffer brothers.

This is not these young actors’ first Emmys rodeo. At the 2016 Emmy Awards, they charmed the audience when they rode in on bikes to distribute peanut butter and jelly sandwiches to hungry A-listers, despite the fact that their series was not yet eligible for an award.

The Internet couldn’t contain its joy about seeing the crew together.

The sci-fi show is nominated for outstanding drama series. Millie Bobby Brown and David Harbour are nominated for Supporting Actor and Actress, respectively. 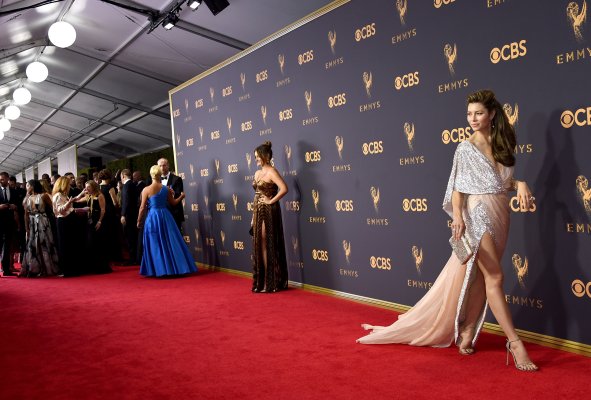 See Celebrities Hit the Red Carpet at the Emmys
Next Up: Editor's Pick