Apple on Tuesday revealed the iPhone X, a high-end version of the popular device with a price tag to match its long list of groundbreaking new features. Here’s a breakdown of everything you need to know about Apple’s new flagship phone.

The iPhone X has a radical new design with a super-high-resolution screen that takes up nearly the entire face of the device, except for a slender cutaway area for the front-facing camera and other sensors. It’s an OLED (Organic LED) display that Apple’s calling “Super Retina,” with 458 pixels-per-inch.

Unlike previous iPhones, the iPhone X has no dedicated Home button. Instead, 3D Touch is baked directly into the display itself. While using an app, users can return to the Home screen by swiping up from the bottom of the display, or switch to another app by pausing mid-swipe. Apple’s voice assistant Siri is activated by a newly enlarged side button, or by simply saying “Hey Siri.”

Users can unlock the iPhone X simply by looking at it, thanks to an array of new sensors and technology powering what Apple calls “Face ID.” Users set up Face ID by letting the iPhone X make a detailed digital “map” of their face. The device then scans the user to check for a match before unlocking.

Apple says the feature will work even if you’re wearing a hat or glasses—even if you decide to grow a beard. It’s powered in part by a “neural engine” running on the company’s new A11 Bionic processor. Apple says it worked to prevent the iPhone X Face ID from being fooled by masks or other trickery. It also works with Apple Pay and other features that previously relied on users’ fingerprints.

Gone are the days of boring, static emoji. With the iPhone X, a handful of emoji can be customized with your own facial expressions, Apple says. The feature works with the front-facing camera and other algorithmic technology baked into Face ID’s recognition tools. It’s built into Apple Messages, the company’s iMessage texting app, and emojis including a robot, panda and cat are capable of becoming Animoji.

As with the iPhone 8 and iPhone 8 Plus, the iPhone X will support wireless inductive charging, a way to provide electrical charge to devices without plugging cables into them. Simply place the iPhone X on a compatible mat, and the device will top itself up. Apple is using the increasingly popular Qi standard to make this all happen. Apple also announced that it’s making a charging mat it’s calling AirPower that can simultaneously charge an iPhone, an Apple Watch and a new AirPods case designed with wireless charging in mind. AirPower will be available next year.

The iPhone X is powered by Apple’s new A11 Bionic chip. That’s the same processor in the iPhone 8, which Apple says will result in better gaming, higher quality photos and can better power augmented reality experiences. 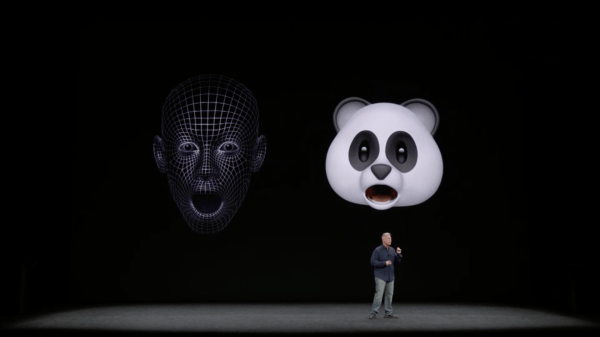 Apple Announced 'Animoji' Today. Here's What That Is
Next Up: Editor's Pick