At the Aloft Hotel in Doral, Fla., the mood among the guests awaiting Hurricane Irma’s arrival was solemn but calm on Sunday.

The Category 4 hurricane made landfall at 10 a.m. Sunday morning in Cudjoe Key, just north of Key West, according to Miami-Dade County spokesman Mike Hernandez. By 11:30, the storm had crossed though the Keys and was headed north toward heavily populated swaths of South Florida.

Its power was already becoming apparent in the Miami area.

Outside the thick glass windows of the Aloft, tropical-force winds raked through the industrial neighborhood, ripping the fronds off palm trees, uprooting street signs and downing power lines. A construction crane collapsed downtown. More than 1.5 million customers are now without power across South Florida, according to utility companies. Eyewitnesses reported waist-deep flooding in some Miami streets, including three to four feet in the city’s financial district, south of downtown. White caps broke in front of a closed CVS.

A few blocks from the hotel, a half-dozen trees, their roots exposed like muddy fists, had fallen on parked cars. Wind gusts topped 65 miles per hour.

But inside the Aloft’s warm lobby, the lights flickered and breakfast pastries were served.

“We have enough for everyone for three days,” said Erica Santiago, 34, one of several black-clad servers bustling around a table set with coffee, toast and muffins. Like most other Aloft employees, Santiago had slept at the hotel on Saturday, leaving her husband at home. “It’s been crazy,” she said. “There are so many people here.”

All 120 rooms at the Aloft were booked, which means there are probably close to 250 guests, another employee said. A sign printed on the hotel’s front doors, which were locked against storm, advised that due to emergency conditions the hotel could not accommodate anyone without a confirmed reservation. “We’re totally full,” Santiago said.

The hotel lost power Sunday morning, but a generator had kicked on, lighting the lobby with a slightly dimmer gray glow. Every few minutes, a persistent high-pitched beeping would come through unseen speakers, an indication that another generator had turned on.

Richard Beck, 60, was seated at a table in the darkest corner of the lobby, reading the news on his cell phone and receiving updates from friends and neighbors back home in Boca Raton, Fla. “I’m grateful to be here, that my family is safe,” he said. “But it’s hard, you know? I had to say goodbye to everything before I left.”

Beck evacuated from the home in Boca Raton where he has lived for the last eight years. He and his girlfriend had taken Beck’s 93-year-old father and his wife with them to the Aloft, which they chose in part because it was constructed recently and was likely up to the most stringent building codes. “It’s been a good place to be,” he said.

Paula Pallette, 52, a tourist from Argentina, stood by a bank of windows, foggy with humidity, taking iPhone videos of the storm outside. She and her husband had booked a vacation at the Hilton on Miami Beach this week, she said. But by the time they were evacuated Friday, it was too late to get a flight out. “This wasn’t our plan,” she said, gesturing at the Aloft’s lobby and laughing. “But it’s okay! It’s nice!”

Shari Sedlis, 55, said she too felt grateful. “Honestly, to be here, I feel blessed,” she said, crouching on the floor with her two dogs, Roxy and Blue. She’d chosen to evacuate from Bay Harbor, Miami Beach along with her 11-year-old daughter and her 91-year-old mother, who suffers from Alzheimer’s. She doesn’t know what they’ll return to next week. “My daughter likes it here,” she said of the Aloft. She’s calling her family’s evacuation a “staycation.”

In the dim corner of the lobby, Beck scrolled through images on his smart phone and stopped at one of a pretty white powerboat called Xander. “This was my boat,” he said, using the past tense. Before he left, he and his neighbors had tied it off in the center of a Boca Raton canal. But with storm surges and hurricane force winds forecasted, he doesn’t expect to see it again.

“One of those lines breaks, and all the boats go like bowling pins,” he said. “It hurts.” 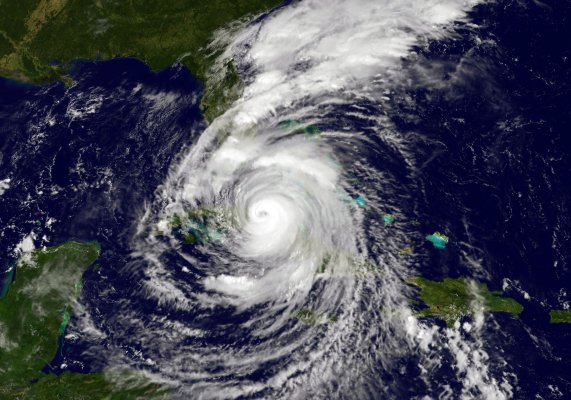 This Is Where Hurricane Irma Will Hit Florida
Next Up: Editor's Pick