'It's All Hands on Deck.' Inside Miami's Hurricane Response Hub

Officer Kerensa Smith with the Miami Dade Police Department helps evacuees move to a bus to take them to a shelter as Hurricane Irma approaches Miami on September 8, 2017.
Mark Wilson—Getty Images
By Haley Sweetland Edwards/Miami

This isn’t Juan Perez’s first rodeo. As the director of the Miami-Dade Police Department and a law enforcement officer in the county for 27 years, he’s experienced his fair share of hurricanes and their aftermath—highway overpasses collapsed, infrastructure ruined, houses blown from their foundations. His own parents were forced to take shelter in a closet in 1992, after Hurricane Andrew ripped the roof of their home.

But when Hurricane Irma, a Category 5 storm and one of the strongest ever recorded in the Atlantic, makes landfall in South Florida early Sunday morning, it very well may be the most destructive of his long career.

“We’re anxious, just like everyone is,” he said in an interview with TIME at the Miami-Dade County Emergency Operations Center on Friday night. “It’s bigger than Andrew, which was catastrophic for us.”

The nerve center for this effort, Perez explained, is the Miami-Dade County Office of Emergency Management, nestled inside the Miami-Dade Fire Rescue building in Doral, just east of the airport. Outside, the operation looks like a windowless warehouse. Inside, it resembles a NASA command center during a shuttle launch.

The central room, which is about the size of four classrooms, features a wall of 18 televisions and a row of 10 additional jumbo screens, all flickering with satellite images of the hurricane’s trajectory and up-to-the-second information on recent events and road closures.

Below, at 72 numbered work stations, men and women in all manor of uniform (plus some in polo shirts) serve as liaisons to every critical local agency, from the fire department and school board to transit authorities, utilities, and the National Weather Service. It’s a patchwork quilt of public infrastructure.

It’s also the single most important room in all of Miami-Dade for the next three days.

“Everything comes through here,” said Charles Cyrille, deputy director of the county’s Office of Emergency Management. Once the hurricane arrives, this room will serve as the region’s sole dispatch center. The emergency team, which is divided into four branches—public safety, human services, infrastructure and municipal—will meet every four to six hours to share information, assess damage, and triage the county’s efforts.

Under the auspices of Emergency Management, normal jurisdictions don’t apply. “In an emergency, you have to think outside of the box,” Cyrille said.

After a recent storm took down power lines, for example, a senior living center’s elevators were disabled, leaving its residents unable to access meals. Since the American Red Cross was already overstretched, Cyrille’s Emergency Management team deployed ambulance drivers to deliver box lunches to the facility.

“Some of the things we do would be unorthodox on a day-to-day basis,” he said, “but it might happen during an emergency, when you have to fill in those gaps.”

On Friday, more than 100 of Perez’s 2,800 police officers were sent to 22 of the county’s 43 shelters, which did not have enough Red Cross or school board staff on site. “It’s all hands on deck,” Perez said. “The responsibility of each department matters little when it comes to saving lives. If we can save lives, we can step in and fill the void.” The National Guard, which is expected to arrive early Saturday morning, will then take over in the shelters.

In recent days, Miami police officers have been assigned to protect businesses, including hardware stores and lumber yards, that have been overwhelmed by crowds desperate for provisions, and to give escorts to trucks en route to refuel gas stations.

“It gets really hectic for people waiting for three or four hours in line for gas and there are disputes out there,” said Police Detective Robin Pinkard, who represents the county. Officers have also been assigned to go door-to-door in vulnerable neighborhoods to ensure that all residents were aware of the mandatory evacuation orders. “We don’t force them to leave,” Pinkard said. “But we want them to know.”

Florida Governor Rick Scott warned earlier Friday that Irma is “way bigger than Andrew” and urged residents in parts of Miami-Dade County and the Florida Keys that are under mandatory evacuation orders to get out of town. Nearly 700,000 Miami residents live mandatory evacuation zones, and authorities expect that roughly 10% may seek a public shelter. Eric Silagy, the chief executive officer of Florida Power and Light Co., told reporters that 9 million people may be without power for days.

“We are telling people three days—three days of preparedness,” said Mike Hernandez, a Miami-Dade county spokesman. “Have water and food and medicine that will last you for three days, at least. There’s a good chance no one will be able to get to you in that time.”

After Hurricane Irma passes and sustained winds drop to less than 35 miles per hour—which could take a day—the Miami-Dade County Office of Emergency Response’s Command Center will begin sending first responders to the places of greatest need. “Our number one priority is saving lives,” Pinkard said. “Then we go to protect property, and then to traffic.”

Cyrille said the center will also rely on a website and mobile app, Snapshot, which allows people to upload how much damage and flooding they experienced at their home. “If people use it, we can look at a map and see which neighborhoods experienced the most damage,” he said.

All this requires coordination amid tough conditions. Miami-Dade County is broken down into 34 municipalities, eight law enforcement districts, and three spillover police regions. Each municipality partners with the county fire department, which oversees the whole region. Each district has roughly 300 officers. Miami City has its own police department, which is also represented at the county’s command center.

“The idea is that everyone is sharing information and communicating direct with each other so we can be efficient with resources,” Cyrille said.

At least that’s the way it’s supposed to work. When it comes to a hurricane, he acknowledged, things never go as planned. 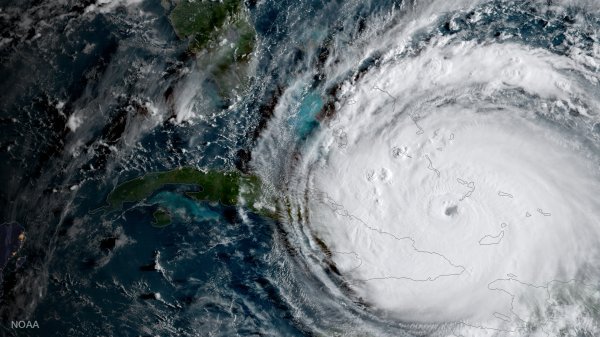 See Hurricane Irma's Path Via Satellite as It Moves Toward Florida
Next Up: Editor's Pick