National Weather Service: 'Nowhere in the Florida Keys Will Be Safe' From Hurricane Irma

Boats in storage at a marina in the Florida Keys on September 8, 2017 in Islamorada, Florida The entire Florida Keys are under a mandatory evacuation notice as Hurricane Irma approaches the low-lying chain of islands south of Miami.
Marc Serota—Getty Images
By Mahita Gajanan

The National Weather Service issued a strong warning for the Florida Keys ahead of Hurricane Irma, which is expected to hit the area Saturday night.

“This is as real as it gets,” the NWS tweeted in all capital letters Friday. “Nowhere in the Florida Keys will be safe.”

The powerful storm, which barreled through a number of Caribbean islands earlier in the week, had left at least 20 people dead as of Friday evening.

Irma is expected to make landfall in Florida, prompting mass evacuations in the state. According to the National Weather Service, Irma is expected to be “catastrophic, life-threatening wind and storm surge impacts” in the Florida Keys on Saturday night and Sunday. The service reminded Florida Keys residents that there is still time to leave the area before the storm arrives.

Ed Rappaport, the acting director of the National Hurricane Center, said the Florida Keys will particularly feel the hurricane’s impact, and could receive at least five to 10 feet of storm surge, along with destructive waves.

“It’s not clear that it’s a survivable situation for anybody that is still there in the Keys,” he told WSVN. 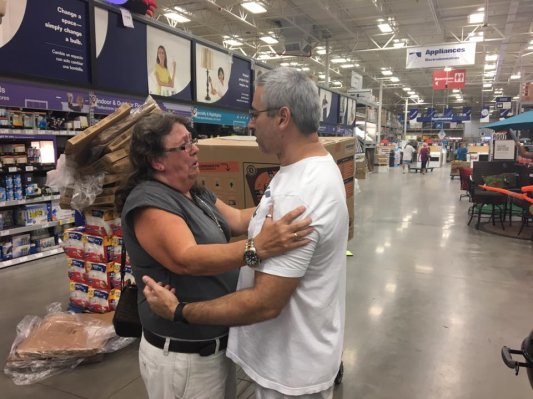 Man Gives Last Generator to a Stranger Amid Prep for Hurricane Irma
Next Up: Editor's Pick