While Martha Stewart isn’t exactly enthralled by fellow lifestyle guru Gwyneth Paltrow, she has nothing but love for the Barefoot Contessa, Ina Garten. The affection is definitely mutual, as was on display during Garten’s recent appearance on the podcast “How to Be Amazing with Michael Ian Black.”

During the interview, Garten revealed that she and Stewart met while she was still running a food store in East Hampton and that Stewart was instrumental in helping her launch her career as a cooking personality. Stewart even put her in touch with an editor when Garten was working on her first book proposal.

“My desk was right in front of the cheese case and we just ended up in a conversation,” Garten said. “We ended up actually doing benefits together where it was at her house and I was the caterer and we became friends after that.”

But these two domestic goddesses do have their differences when it comes to their entertaining and cooking styles.

“I think maybe what I do is I take one step back and make it a little simpler so it’s really doable,” said Garten. “Martha does love the gorgeous presentation, so if she’s making a pumpkin soup, she might carve out a pumpkin and serve it in the pumpkin, which is great.”

Garten also credits Stewart for being a trailblazer in the lifestyle space, clearing the path for people like Garten.

“I think she did something really important, which is that she took something that wasn’t valued, which is home arts, and raised it to a level that people were proud to do it and that completely changed the landscape,” she said. “I then took it in my own direction, which is that I’m not a trained professional chef, cooking is really heard for me — here I am 40 years in the food business, it’s still hard for me.” 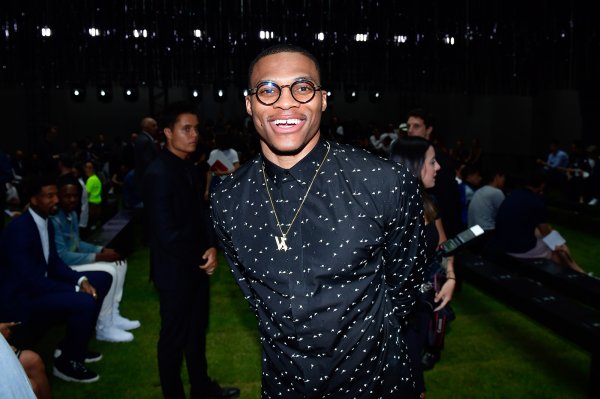 Russell Westbrook on Being the King of NBA Style
Next Up: Editor's Pick