Shonda Rhimes is known for her feisty female characters, but if there’s one thing she hates being asked about is where the inspiration for them originated.

Rhimes, the first woman to create three hit shows with more than 100 episodes each, sat down to discuss her experience of being a woman in the television industry for TIME Firsts — a Time Inc. multimedia initiative that champions female accomplishment through candid interviews with groundbreaking women, including Oprah Winfrey, Ellen DeGeneres, Aretha Franklin and, of course, Rhimes herself. “Every time someone says, ‘How do you write such smart, strong women?’ I find it appalling because it suggests that there are stupid, weak women and that’s who is generally out there,” says the creator of Grey’s Anatomy, Scandal, and How to Get Away With Murder.

The uber-producer goes on to describe her experience in what she coins the “old white men room” where she and her producing partner, Betsy Beers, were warned no one would like the lead characters of Grey’s because they weren’t “nice” and because “no one is going to like a woman who sleeps with a man right before her first day at work,” à la Meredith in the series’ pilot episode. “I hear a lot that what’s great about the characters is that they’re unapologetic,” says Rhimes. “I think that women are raised to believe that they’re supposed to want certain things and so you feel like you’re supposed to apologize when you don’t want those things.”

For Rhimes, the key difference between men and women is a confident attitude. “Men will do anything,” regardless of their qualifications, she says, while women are more hesitant and thoughtful. “I don’t necessarily know if there’s anything wrong with being more cautious and careful, but I also know that we’re not going to feel any wiser or any more ready in 10 years than we did 10 years ago, so we might as well just leap.”

Rhimes’ interview is part of TIME Firsts, a multimedia project featuring 46 groundbreaking women. Watch the rest of the videos at Time.com/Firsts. Buy the book at the TIME Shop. 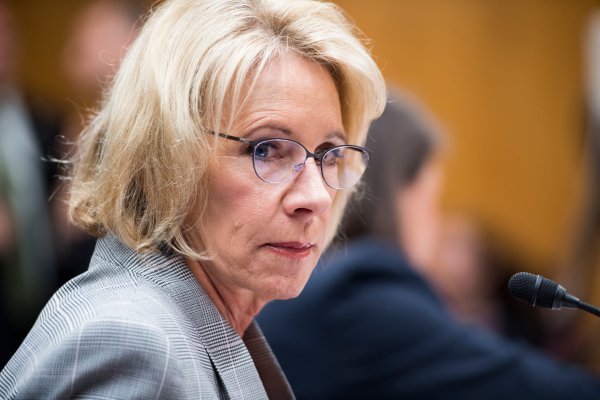 Betsy DeVos Is Wrong to Rewrite the Obama Administration's Sexual Assault Guidance
Next Up: Editor's Pick