Original American Idol winner Kelly Clarkson continues to prove that our national obsession with televised singing contests isn’t for nothing: she’s still got the powerful pipes that earned her the title back in 2002. The latest evidence comes in the form of “Love So Soft,” one of two new songs that Clarkson generously dropped on Thursday, along with a surreal and colorful music video.

The psychedelic visual sees Clarkson dressed up in vibrant ball gowns and sharp suits, surrounded in turn by magical meadows, kaleidoscopic backup dancers and exploding decor. (The video is directed by Dave Meyers, whose bold aesthetic also featured in the videos he directed for Kendrick Lamar’s “HUMBLE.” and Katy Perry’s “Swish Swish.”) But ultimately the complex dreamscape just serves to underscore Clarkson’s soulful, cheeky delivery of the toe-tapping tune. Grounded with a rap-sung chorus, “Love So Soft” is bound to appeal to fans across genres and generations; it also works as a nice showpiece for her voice.

“It’s been a record I’ve been dying to make since I was a kid. It’s very much a modern take on that ’90s urban R&B pop. In the last 10 years I feel like we’ve lost a bit of that in music,” Clarkson told EW recently of her upcoming eighth album, Meaning of Life, out Oct. 27. “Love So Soft” may not break new ground, but it’s a welcome addition to that tradition.

Listen to Clarkson’s other new track, the equally soulful ballad “Move You,” below. 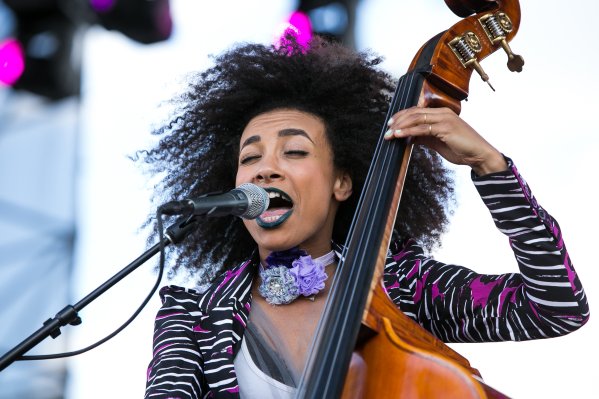 Why Esperanza Spalding Is the Most Audacious Innovator in Jazz
Next Up: Editor's Pick