Secretary of Education Betsy DeVos said Thursday that her department will change the Obama Administration’s guidance for handling cases of sexual assault on college campuses and rethink the way Title IX regulations against gender discrimination are enforced.

“The sad reality is that lady justice is not blind on campuses today. This unraveling of justice is shameful, it’s wholly un-American,” DeVos said during a speech at George Mason University in Virginia . “There must be a better way forward. Every survivor of sexual misconduct must be taken seriously. Every student accused of sexual misconduct must know that guilt is not predetermined.”

DeVos’ speech came almost two months after she met with various advocate groups to discuss how sexual assault investigations are handled on college campuses, listening to victims of sexual assault and to students who say they have been falsely accused. Victims’ advocates have urged DeVos not to roll back the Obama Administration’s controversial Dear Colleague letter. That letter established strict guidelines for universities to follow when investigating sexual assault complaints or risk losing federal funding under Title IX, the federal law that prohibits sex discrimination in education.

On Thursday, DeVos criticized that guidance for creating a system that “has failed too many students,” listing examples of victims and accused students who say their cases were mishandled.

“Instead of working with schools on behalf of students, the prior administration weaponized the Office of Civil Rights to work against schools and against students,” she said. “The era of rule by letter is over. Through intimidation and coercion, the failed system has clearly pushed schools to overreach.”

Advocates of sexual assault victims quickly criticized the announcement, arguing the change will result in a reversal of recent progress. “What seems procedural is a blunt attack on survivors of sexual assault,” Fatima Goss Graves, president and CEO of the National Women’s Law Center, said in a statement. “It will discourage schools from taking steps to comply with the law—just at the moment when they are finally working to get it right.”

Jess Davidson, managing director of the group End Rape on Campus, was among those who protested outside the speech on Thursday. “I have had survivors calling me hysterically in tears worried that their government is going to go back on their civil rights,” she said in a phone interview. “They’re very scared.”

But DeVos’ speech was celebrated by Cynthia Garrett, co-president of Families Advocating for Campus Equality (FACE), a nonprofit founded by mothers who say their sons were falsely accused of sexual misconduct in college.

She said an email group for parents affiliated with FACE lit up with positive messages after DeVos finished speaking: “Thank you for giving the innocent accused a platform.” “Praise God.” “Brought me to tears. Progress is being made,” they wrote.

“These families have been through a lot. This Google group email exchange has had many days of very heavy, very sad interactions between the families,” Garrett said. “But this has given them some hope, maybe not for themselves or their sons or daughters specifically, but for the future.”

FACE and some legal experts have argued that the 2011 guidance created a one-sided system that threatens the due process rights of accused students by requiring college disciplinary proceedings to rely on a preponderance of evidence when adjudicating cases of sexual assault — a lower burden of proof than is required in criminal courts.

But 20 state attorneys general have urged DeVos to keep the protections in place. And on Thursday, former Vice President Joe Biden, who championed efforts to combat sexual assault during his time in the White House, said “any change that weakens Title IX protections will be devastating.”

Davidson said the problems with the current system are not a result of the Dear Colleague letter, but rather a result of schools failing to enforce it properly. “I think [DeVos] might have a fundamental misunderstanding of Title IX and the Dear Colleague letter,” Davidson said. “I look at this false equivalency that she set up in her framework about the issues facing survivors and the issues facing the accused, and I think she is trying to shut survivors out.”

DeVos said the department will launch a so-called notice and comment process to develop a new approach.

“We know this much to be true: one rape is one too many, one assault is one too many,” DeVos said. “One person denied due process is one too many. This conversation may be uncomfortable, but we must have it. It is our moral obligation to get this right. Campus sexual misconduct must continue to be confronted head-on.” 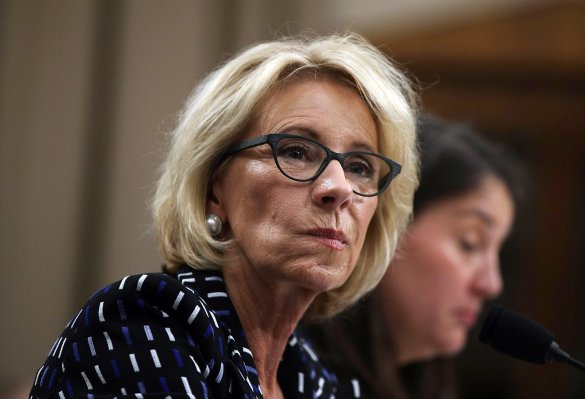