Episode 8 of the Podcast 'Countdown': Collision in Space

A view of Russia's Mir Space Station backdropped against a cloud-covered Earth. One of the solar array panels on the Spektr Module shows damage incurred during the impact of a Russian unmanned Progress re-supply ship which collided with the space station June 25, 1997.
NASA—Getty Images
By Jeffrey Kluger

Nothing stands still in orbit. To stop is to die — or at least to come plummeting back to the ground. That’s the nature of the forces that keep spacecraft flying, with their altitude and velocity balanced in just such a way that they fall endlessly and silently around the planet, physics serving as their only fuel.

But orbiting is a far more dynamic, far more violent process than it seems. Spacecraft circling the Earth tear along at an average speed of 17,500 mph (28,160 k/h) — or a cool 5 miles every second. That makes it especially tricky when one ship blazing through its orbital paces tries to meet up and dock with another. To achieve such an astronautic pas de deux, the spacecraft must precisely synchronize their movements, exactly matching their altitudes and speeds so that they appear, relative to each other, to be standing absolutely still. One ship then tweaks its thrusters slightly, adding just a mile or two per hour to the 17,500 it’s already clocking, and closes slowly in. It’s a monstrously hard job with monstrously high stakes — a mistake could mean the catastrophic loss of both spacecraft and crew.

Nonetheless, from the beginning of the Space Race, the U.S. and the old Soviet Union avoided any such crackups mostly by designing their spacecraft guidance systems to within the finest tolerances and training their astronauts and cosmonauts to operate them with equal precision. But what happens when your crews are still first-rate but your spacecraft is a jalopy — like, say, the overgrown, broken-down Mir space station which, by the late 1990s, had long since passed its orbital expiration date? And what happens when you’re trying to bring an uncrewed Progress cargo ship in for a safe docking with the station but you’re using a new maneuvering system that had barely been tested before — and had failed that test the last time it was tried?

Those were questions that should have been asked long before June 25, 1997, when Russian cosmonauts Vasily Tsibliev and Aleksandr Lazutkin and American astronaut Michael Foale tried just such a maneuver 233 miles above the safety of the Earth. The emergency that unfolded in the 24 hours that followed would be the worst near-disaster in space since the Apollo 13 mission 27 years before — and would test the ingenuity of the ground and the cool-headedness of the crews in just the same way.

TIME tells that harrowing story in Episode Eight of the podcast Countdown, “Collision in Space.” 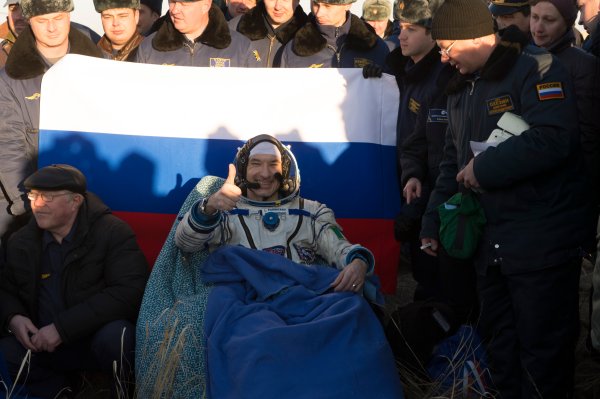 Episode 7 of the Podcast 'Countdown:' The Strange Case of the Drowning Astronaut
Next Up: Editor's Pick