The sun rises near The United States Capitol Building on March 20 in Washington, D.C. The Senate will hold a confirmation hearing for Supreme Court Nominee Neil Gorsuch and FBI Director James Comey will testify before the House Permanent Select Committee on Intelligence on alleged Russian interference in the 2016 election.
Zach Gibson—Getty Images
By Nash Jenkins

Faced with a packed legislative calendar and looming deadlines, President Trump cut a deal with congressional Democrats on Sept. 6 to temporarily fund the government and lift the U.S. debt limit, while providing a down payment for disaster relief. Here’s a look at what lawmakers still have to do this fall:

KEEP THE LIGHTS ON

Reached over the objections of Republican leaders and Treasury Secretary Steven Mnuchin, the deal puts off two fiscal showdowns until December: approving spending to keep the government running and increasing the nation’s borrowing authority. Conservative lawmakers may balk at a debt-limit hike that doesn’t include offsetting spending cuts.

The devastating storm in Houston was rapidly draining FEMA’s coffers even before Hurricane Irma spiraled toward the East Coast. The House quickly passed a $7.9 billion package to assist with recovery efforts. But the Trump Administration is still calculating how much more will be needed, and here, too, conservatives may object to the hefty price tag unless the package is paired with reductions.

Having dropped his insistence on funding for a border wall, Trump’s end-of-year wish list is now topped by a tax-reform package, though lawmakers and the Administration are still haggling over details. In the meantime, Trump has dropped another complicated project on legislators: reaching a deal to replace the Deferred Action for Childhood Arrivals program for immigrants brought to the U.S. illegally as children. Trump moved to end DACA on Sept. 5 and gave Congress six months to find a solution. 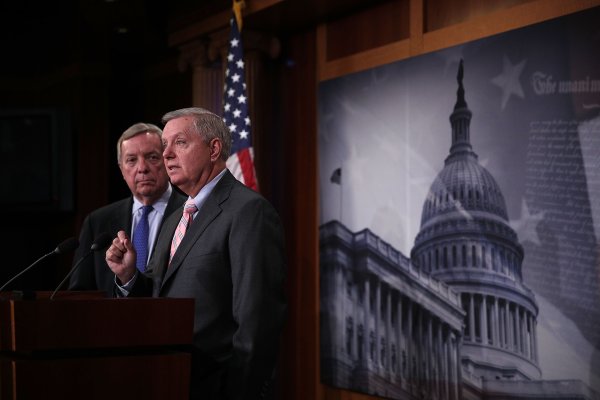 Can Congress Spare the Dreamers?
Next Up: Editor's Pick