Turning Contempt Into Compassion in the Wake of Hurricane Harvey

We’ve all been thinking about how to help Texas after the unfathomable devastation of Hurricane Harvey. But after watching the way the people of that state have responded to this vast tragedy, I think that Texas might save the rest of us too. There’s been so much ugliness, division and fear on our screens and in our hearts over the past two years that it was getting hard to imagine how we’d ever stitch the country together again. Then a once-in-a-thousand-year storm hit.

Harvey was unprecedented. Even those of us who live far from Houston have been jolted out of our silos. We’re so hungry for goodness, for common cause, for reasons to like each other that it’s no surprise that we keep watching the video footage from Texas–the scenes of rescue after rescue, kindness after kindness. They are a reminder of something we feared might be extinct: that aspect of America that brims with compassion–the kind that doesn’t discriminate.

It’s still there. You heard it in the unbelievably gentle way that rescuers spoke to the traumatized people they were hoisting off roofs or into boats. Those responders, volunteers and professionals must have been tired and scared themselves, but they didn’t rush, and they treated every person and even the pets as precious, which of course they were.

I can’t stop looking at one particular video of a group of men and women, hands clasped in a line across rushing water from the shore to a truck where an older man was trapped. As they coordinated and encouraged each other, you could hear all of Texas in their voices–long Southern vowels, rolling Spanish consonants and a common urgency. The man made his way to dry land braced by that human chain. Once there, he sagged in exhaustion, and a young dark-haired guy stepped up and said, “I’m going to pick you up now, if that’s O.K.” And then he carried the man to a vehicle like it was an ordinary thing. Just knowing about that bit of kindness feels like a balm for our collective souls in this era of bitter fights and bloated egos.

There is an intimacy to seeing people of every type thrown together without any social trappings. Everyone’s intertwined, those onscreen and those watching from afar. Even journalists. A news crew filming from a boat was called to help a fragile elderly couple out of their home. They were tender and careful, calling the man “sir” and telling the woman, who seemed embarrassed, that she looked great. The process of lifting the pair into a boat without hurting them was a slow, riveting drama. Never has moving four feet looked so daunting. And no one was asking whom these people voted for or about tax reform or whether a Confederate statue should be moved.

Right now, we are feeling like one tribe–one whose members will set out in the dark through filthy, treacherous waters to save someone they’ve never met. But absent a crisis, it’s all too easy to slip back into our corners, to see people of another state or ethnicity as a threat. You can already hear it in the murmured resentments over the allocation of past disaster-relief funds. The narrative of distrust will return, no doubt fueled in part by presidential tweets.

But don’t lose hope. Empathy is hardwired into our species, says Dr. James Doty, who studies the brain from inside and out as a neurosurgeon and who founded Stanford University’s Center for Compassion and Altruism Research and Education. When we take care of each other, the pleasure centers of our brains light up, he explains. “Altruism is not only a benefit to others, but it benefits us in terms of our health and longevity,” says Doty. “It’s quite profound.” We evolved this way as hunter-gatherer tribes because if one person suffered, it put the whole group at risk. We learned to respond to those in pain.

You can teach yourself to be compassionate when empathy is hard to come by, says Doty. List the things you have in common with someone. Maybe it’s that you both have children, or even that you’re both Chicago Cubs fans. It may sound too simple, but his research indicates that exercises like this help us see each other’s humanity and see ourselves in another’s face.

You could also rewatch some of those storm videos when you want to be reminded of our better angels. Over and over, you hear people being reassured as they are supported by the arms of strangers. “We’ve got you … I’ve got you … You’re O.K.,” say the rescuers to the toddler, to the older lady with brightly painted nails, to the woman in labor. It’s a message all of us need to hear–or deliver–more often. 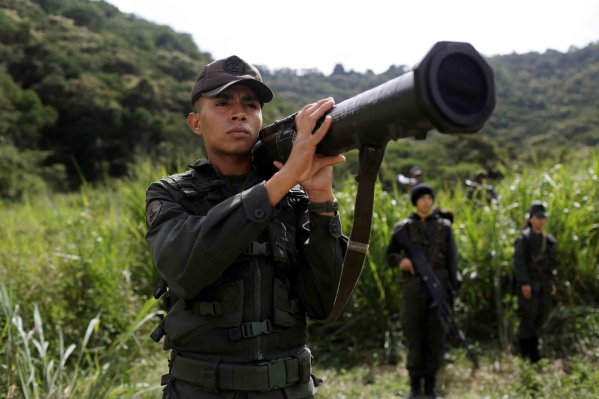 It's Time to Plan for Civil War In Venezuela
Next Up: Editor's Pick