A photograph going viral Wednesday shows Senate Majority Leader Chuck Schumer having an encounter with President Donald Trump during a meeting in the Oval Office. The image, taken by Getty Images Staff Photographer Alex Wong, was taken from outside the White House using a long telephoto lens.

But Wong says the interaction between the two political powerhouses wasn’t as intense of a confrontation as it may seem. That the meeting ended with an unexpected deal between Trump and Congressional Democrats to raise the debt ceiling for three months as part of a Hurricane Harvey relief package would seem to lend credence to Wong’s interpretation.

TIME spoke with Wong about what it took to get the unusual photograph, which also appears to include White House Director of Legislative Affairs Marc Short. The following interview has been lightly edited for length and clarity.

TIME: Tell us about how you made the image.

WONG: We were covering the departure of the President from the South Lawn [of the White House.] We were brought out by the Rose Garden to wait for him to come out from the Oval Office. And when I was out there, I saw through the window that the President was having a meeting with Congressional leaders.

I saw Kevin McCarthy, the House Majority Leader, he was sitting in the room. When I saw him, I realized the meeting wasn’t over yet. So I held up my long glass to try to see whether I could get a shot. For a while they were sitting, then I saw [House Minority Leader] Nancy Pelosi stand up, and Kevin McCarthy stood up. So I thought the meeting might be about to finish.

I waited for a little bit, then I saw [Senate Majority Leader] Mitch McConnell and Chuck Schumer pass by behind the window. Then, all of a sudden, I saw the President walk into my sight. He talked to Chuck Schumer briefly, and that’s how I got my shot. (Wong later clarified that the image was taken through a White House door, not a window).

In the image, it looks like Trump and Schumer are having a confrontation. Was that also your read of the encounter?

It didn’t feel like a confrontation to me . . . I didn’t know what they were talking about, but just from their body language, I think the Senate Minority Leader was making a point to the President.

What kind of equipment did you use to get the shot?

I was using a 300mm f/2.8 lens, and I had to crop the picture quite a bit, because it’s kind of far away. I think what you’re seeing is about one sixth of my frame, so it’s a huge crop.

Have you thought about getting an image from that spot before?

Usually we pay attention to what’s going on [in the Oval Office.] It just so happens that today there was a meeting going on in there, and it wasn’t finished when we walked out there. Sometimes it’s nothing, but sometimes you might be able to get something if there’s something going on in the room.

Is there anything else people should know about this photo?

I wasn’t in the room, so I didn’t know what they were talking about [at the time]. But afterwards, I overheard that when they did the press gaggle on Air Force One, the President came out and he talked about the Democratic leaders agreeing with him about a temporary debt ceiling [deal.]

So I realized, oh, they had made an agreement in the meeting. That’s how I found out. But to have the Democratic leader and the President in a meeting — it’s not very usual, so I was very lucky that I got that moment. 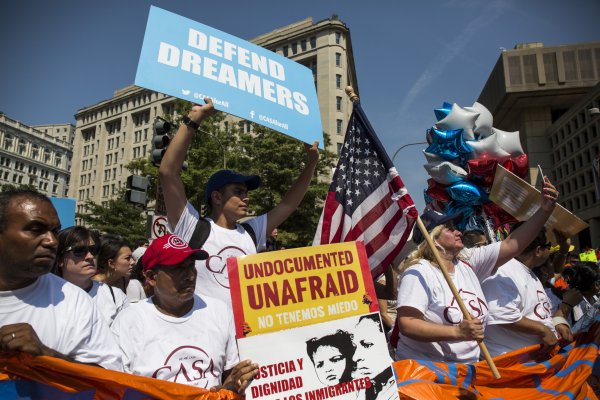 'This Is About Basic Decency.' Obama Rips Trump Over DACA Decision
Next Up: Editor's Pick