Everything We Know About the Inevitable It Sequel

Warning: This post contains spoilers for the movie It.

The ending of the movie It is so blatant in its setup for a sequel, it puts the words directly into the characters’ mouths. The seven misfits who have been terrorized by Bill Skarsgård’s Pennywise the Clown gather to make a (very messy) blood oath: no matter where their lives take them, they’ll return to the creepy little town of Derry, ME. in 27 years when the menace wakes again from its slumber. One of them says: “If there’s a sequel, we’ll come back.” And then the title card: It: Chapter One.

The movie is currently banking a score of 90 percent on Rotten Tomatoes, and its opening weekend box office is tracking somewhere in the vicinity of $65 million—which would make it a record for the month of September. It boasts the highest ticket pre-sales for a horror movie in history. A sequel, in other words, is as foregone a conclusion as the nightmares the movie will generate across the country Friday night.

What can we expect of It: Chapter Two? (If only the title It Follows wasn’t already taken.) The plot of Stephen King’s novel, the inspiration for the film, is only moderately helpful, given that the adaptation, directed by Andy Muschietti, takes plenty of liberties. It’s set entirely in the late-1980s, whereas the book jumped from the 1950s to the mid-’80s, and several of its details—like the various forms taken by It, references to the Macroverse and the Ritual of Chüd—are left out of the film.

It is safe to assume, though, that a sequel would take place in, or close to, the present day. The book’s second part takes place 27 years after the first: the members of the Losers Club have grown up and dispersed, and It, right on schedule, has returned to terrorize Derry. At the end of the movie, the kids joke about how far away 27 years seems—it’s 1989, so they’re imagining 2016—and what they’ll be doing by then. The 1990 TV miniseries, which starred Tim Curry as Pennywise, covered both parts of the book, with adult actors stepping in for the second half.

Recent interviews have offered a shred of insight into where Chapter Two might go. Muschietti told Yahoo Movies that he wanted the first film to focus on the kids’ emotional journey and not get weighed down by the complexity—and the costs—of the story’s multidimensional themes. “In the book the perspective of the writing…is always with the Losers, so everything they know about Pennywise is very speculative and shrouded in absurdity,” he said. “I wanted to respect that mystery feeling of not knowing what’s on the other side.”

Skarsgård told Metro that he expects the second film to further explore Pennywise’s backstory and “delve into the psychological and metaphysical spaces of this transdimensional being.” In the same interview, Jaeden Lieberher, who plays Losers Club member Bill, said he’s looking forward to seeing which actor is cast to play him as an adult. Talking to Entertainment Weekly, he and his costars dream-cast themselves as adults: Finn Wolfhard chose Bill Hader, Chosen Jacobs chose Chadwick Boseman and Sophia Lillis picked Jessica Chastain.

It sounds like, if things shake out as Muschietti envisions, we haven’t seen the last of the seven young stars of Chapter One. “There will be a dialogue between the two timelines,” the director explained. “So it’s not just the [Losers’ Club as] adults, we’re going to come back to 1989.”

It will be interesting to see whether the enthusiasm for the first film—which seems to be as much about its nostalgic callbacks to Stand by Me and the present obsession with Stranger Things as it is about horror fandom and King obsession—will carry over into a movie focusing on adult characters. For now, those red balloons are floating all the way to the bank. 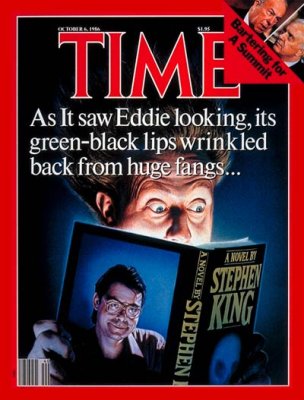 Why Stephen King Planned to Quit Writing Horror After 'It'
Next Up: Editor's Pick