How Marriage May Literally Break Your Heart...or Keep it Healthy

AleksandarGeorgiev—Getty Images
Ideas
By Belinda Luscombe
Luscombe is an editor-at-large at TIME and the author of Marriageology: The Art and Science of Staying Together.

People’s heart health, many studies have concluded, is very connected to the health of their relationships. Research consistently shows that happily married people have lower levels of coronary heart disease, the world’s No. 1 killer, than divorced, single or separated people. Divorce is linked to such heart diseases as coronary atherosclerosis, for example. (Insert your own heartbreak joke here.) But a new study suggests that the relationship between long term relationships and cardiac health may be more complex than it looks.

In a special issue of the journal American Psychologist dedicated to relationships and health, Timothy Smith and Brian Baucom of the University of Utah suggest a different way of looking at the correlation between heart health and marriage or what Smith calls “marriage-like relationships.” They note that many of the qualities that make people good at relationships — their personality, their level of emotional adjustment and the like — also make them more likely to be healthy, to deal with stress better, to sleep well. That is, it may not be the marriage that’s making people healthy, it may be that the character traits that are damaging their health are also keeping them from being married. Or that both are compounding the other.

“If you think about the most well-documented individual level risk factors for the development or poor course of cardiovascular disease—depression, anxiety, anger, hostility, pessimism, low conscientiousness, PTSD—all of those things have very reliable associations with difficulties in close relationships,” says Smith, who is distinguished professor of psychology at the University of Utah.

“There’s a substantial literature that suggests that improving people’s management of chronic diseases like coronary heart disease can be made better or worse by how things are going in that relationship.” The effect is much less about how one monster marital tiff is going to give someone a heart attack and more about how a consistent routine of negative interactions is likely to have a stressful effect on circulation.

There are some purely practical issues at play here. Some of the biggest risk factors for cardiac disease, including smoking, lack of exercise and a high fat diet, are easier to change if a person has a spouse who is enthusiastic about such alterations. If a husband or wife is a smoker or only wants to eat fried food, and doesn’t care enough about his or her partner to give up such habits, it becomes harder for the cardiac patient to give up those things.

Plenty of research already links marriage and weight gain, and scientists have firmly established the connection between obesity and heart disease, diabetes, and certain cancers. Moreover, “difficulties with close relationships and things like depression and hostility make it much harder to stop smoking or improve your exercise,” says Smith, because people rarely make healthy but sacrificial choices when they feel like hell.

A functioning partnership also makes the treatment schedule heart patients need to adhere to run more smoothly. Patients who are in a supportive and happy relationship are more likely to be reminded to take their medications and keep their follow-up appointments than those who are single. And they’re less likely to feel nagged or bullied into doing so than those who are in dysfunctional relationships.

Then there’s sleep. “Sleep disorders and insomnia are strongly predictive of heart health,” says Smith. Folks whose marriages are happy tend to sleep better than those who are in conflict with their spouse, or who are lonely and brooding at night. They don’t fight as much and when they come home from a stressful day at work, they can calm down and give their circulatory system a breather.

Smith and Baucom therefore suggest that cardiologists should recognize the inextricable role of the spouse in the treatment of their patients. Instead of just looking at the heart as a multi-chambered organ in a chest-cavity, physicians might consider aspects of the heart that can’t be seen in a scan. For patients whose relationships are faring poorly, perhaps physicians could recommend an online marital course (like Toucan) or some community-sponsored marriage education.

Spouses, Smith notes, are also wonderful fact-checkers. Many doctors rely on self-reports and questionnaires to assess how the people in their care are doing. But, in the word of that famous TV doctor, everybody lies. So a patient may say he or she is exercising regularly or not in any pain, but his or her partner knows whether that is really true and can offer a more objective view.

Smith did one study in which 114 couples were observed while talking over a recent argument. The quality of their interactions was coded and each participant was then tested for cardiac health. Those who had more hostile, less constructive interactions had a higher likelihood or coronary atherosclerosis. “The quality of their interactions was a better predictor than self-reports,” says Smith. “It accounted for about as much variance as smoking or being overweight.”

But he dismisses the idea that marriage is a magic bullet. “I don’t think there’s anything magical about that relationship, it’s about the recurring pattern of interpersonal relationships over a long period of time,” he notes.”Do we have regular satisfying connections with others or do we tend to feel isolated and alone? Do we feel like, when we have differences, we can address them in a constructive cooperative way or is there more direct antagonistic engagement?”

Being married, he surmises, leads to more of those healthy interactions. But it’s not a perfect marker of the stuff that really matters: feeling connected and valued. 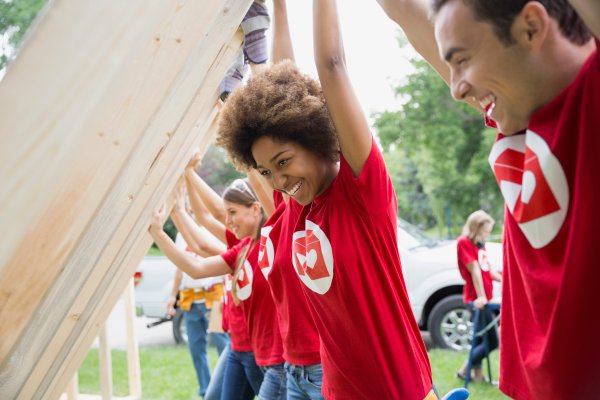 National Service is Key to Rebuilding After Harvey
Next Up: Editor's Pick