A street is covered with floodwater after torrential rains pounded Southeast Texas following Hurricane Harvey on Sept. 3, 2017 in Orange, Texas.
Scott Olson—Getty Images
Ideas
By Ari Blask, Ike Brannon
Blask, a former Research Associate at the Cato Institute’s Center for Monetary and Financial Alternatives, is a student at Columbia Law School; Brannon is a visiting fellow at the Cato Institute.

As the floodwaters recede in Texas, the United States will need to reckon with a uniquely tragic aspect of Hurricane Harvey: that only about one-fifth of the storm’s victims were insured for flood risk. Those without insurance will likely receive some federal assistance, depending on the details and nature of the relief package Congress passes. However, if past catastrophes and FEMA administrator statements are any guide, most uninsured victims will not receive sufficient aid, and the process will prove lengthy and arduous.

Unlike with Hurricane Katrina, it is not obvious that policy or public leadership could have mitigated the damage. But the fact that we have so many victims without flood insurance largely owes to the flawed nature of the federal government’s National Flood Insurance Program.

In creating the NFIP in 1968, Congress wanted to reduce the need for post-hoc federal aid after disasters. But the program has clearly failed to achieve that end, and Harvey will not be an exception.

Homeowners with a federally backed mortgage who live in “Special Flood Hazard Areas” — zones with a 1% or greater chance of flooding annually — are required by law to have flood insurance. However, the vast majority of the Houston metropolitan area was outside this “hundred-year” flood zone, but flooded anyway — in what some FEMA administrators have called a thousand-year flood.

Harvey shows the folly of the NFIP’s current approach. For starters, the flood probability data that determines which areas are subject to the mandatory purchase requirement gauges risk frequency but not severity. This misinterprets the purpose of insurance: to protect policyholders against dangerous and costly but unlikely events. Yet the NFIP prioritizes covering properties where frequent flooding is inevitable and predictable, as opposed to the victims of a storm as severe but unexpected as Harvey.

While homeowners not required to have flood insurance are still free to purchase a policy, the fact that flood insurance provision is essentially a government monopoly inside flood zones explains why most people don’t. That monopoly also leaves property and casualty insurers with a sparse market for flood insurance and, as a result, little incentive to invest and learn about the market. (The NFIP doesn’t share its data with them.) So when these companies do offer flood insurance, they don’t market it.

As with most monopolies, the NFIP offers a one-size-fits-all product and faces little incentive to meet consumer demands; its policies don’t cover finished basements, for example. Moreover, the NFIP does not price premiums like a private insurer. Its premiums do not reflect the true, current risk of flood damage that encompasses all available information, such as updated meteorological and climatic data, but instead merely uses historical data, which may not be all that relevant in areas where flood plains can change greatly over time. The result: property owners with low risk tend to pay too much, subsidizing policyholders facing a greater probability of floods.

But the most important reason few homeowners had flood insurance coverage is simply that standard homeowners insurance does not cover flood risk. Humans tend to be notoriously bad at gauging risks — especially low-probability, high-cost events — and as a result often decide annual flood premiums are not worth the cost. The earthquake that rocked the Washington, D.C., area in 2011 caused thousands of homeowners there to discover that they were not insured against earthquakes. Once they learned it would cost a couple thousand dollars a year, most decided to do without it despite the reminder that one was possible on the East Coast.

That’s why there are so many benefits to an all-hazards insurance system. Everyone with homeowner’s insurance would be covered for flood risk. People actually facing no risks would not have to pay for the flood aspect of their coverage; people facing high-severity, low-frequency risk in places like Houston would be covered; and people that want to live where frequent flood losses are inevitable would pay a sufficiently high premium.

Industry experts suggest that all-hazards policies could become prevalent in the United States if policymakers make it easier for private insurers to enter the market and compete with the NFIP. Private insurers are eager to compete for a greater share of the U.S. market. The size of the traditional reinsurance industry and the development of insurance-linked securities, like catastrophe bonds, show that the private market can cover the costs of a tragedy like Harvey without going broke.

Congress is currently considering bills that would encourage private flood insurance by releasing FEMA flood data and changing lending rules, among other provisions. The NFIP is set to expire on September 30. Some politicians, including Senate Minority Leader Charles Schumer, have suggested that in light of Harvey Congress should quickly extend the program without much reform discussion. But the opposite is true: Harvey has revealed the flaws of the NFIP and why we desperately need reforms to encourage private-sector competition and innovation.

It may seem difficult now, but Texas will eventually be able to rebuild and bounce back stronger than before. And with changes to the way the U.S. approaches flood insurance, Americans in all parts of the U.S. can be better prepared to avoid unforeseen catastrophes like this one. 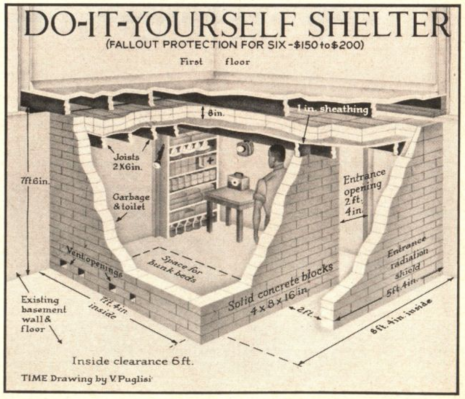 Why Americans Stopped Building Fallout Shelters
Next Up: Editor's Pick