The Siege of Deir al-Zour Is Broken in a Blow to ISIS, But a Boon to Assad

Syrian government forces stand in Kobajjep some 40 kilometres west of Deir Ezzor after taking control of the town as they advance towards Deir Ezzor in the battle against Islamic State (IS) group jihadists on September 5, 2017
George Ourfalian—AFP/Getty Images
By Jared Malsin

Syrian troops broke the Islamic State’s nearly three-year-old siege of the eastern city of Deir al-Zour on Tuesday, a major setback for the dwindling forces of ISIS and an emotional victory for the regime of President Bashar Assad.

The breakthrough by forces loyal to Assad was a new sign of the collapse of the Islamic State’s self-proclaimed caliphate in Iraq and Syria. Deir al-Zour is the largest municipality in eastern Syria, and one of the only sizable towns remaining under the extremist group’s control. After three years of laying siege to an estimated 93,000 civilians who survived on food aid airlifted by the United Nations, the Islamic State failed to completely overrun the city.

Deir al-Zour is the most important of a string of towns along the Euphrates River where U.S. military officials expect ISIS to make their last stand as a conventional fighting force. Top ISIS leaders such as Abu Bakr al-Baghdadi are rumored to be hiding in the area. ISIS forces in that region now find themselves squeezed by American-backed Kurdish-led militias to the north and Syrian government forces to the west. To the east lies Iraq, where operations against the jihadists continue.

The loss at Deir al-Zour is the latest in a series of major setbacks for the extremist group. In July, Iraqi forces reclaimed the city of Mosul following a nine-month long battle for the metropolis that had been the largest under ISIS control. The group’s capital in the Syrian city of Raqqa is under siege by American-backed militias. One of ISIS’ heartland towns, Tal Afar, fell to Iraqi forces after just eight days in August, a swift collapse that suggested the crumbling of the group’s command and control structures.

“They’re gaining no ground in this region of the world. They’re only losing ground, they’re only dying, and they’re losing their touchstones,” said Lt. Gen. Stephen Townsend, the outgoing commander of the U.S.-led military coalition against ISIS in an interview with TIME.

Assad’s forces, meanwhile, can now begin a potentially fierce fight to reclaim the city as a whole with the backing of Russian airpower. That would represent a strategic and symbolic victory for the regime, reclaiming a critical toehold in a section of Syria that in years past appeared lost to Assad’s enemies. Regaining the city would allow the regime to continue to reclaim more territory in the east, continuing a pattern of gains that has continued with few exceptions since Russia intervened on Assad’s side in the civil war in 2015.

Damascus now controls an estimated 40 percent of Syria, and Assad is determined to further cement his hold on power. “If this turns into a place that Assad uses to attack from and tries to move out from, that opens a whole new set of fronts for them,” said Aron Lund, a Syria expert affiliated with the Century Foundation, a policy institute in New York.

The advance in Deir al-Zour is also an indication of the shifting contours in the civil war as a whole. In December 2016, the Assad regime lost a battle against ISIS at the ancient ruins of Palmyra, indicating that Damascus had overstretched its forces as it continued to battle rebel groups in western Syria, including in the key city of Aleppo.

Now, with mainstream rebel groups contained and Russian-brokered ceasefires in place in other sections of the country, the government and its militia allies have more forces to commit elsewhere, including the fight against ISIS.

As for ISIS, its defeat as a land army in eastern Syria and throughout the region now appears to be only a matter of time. 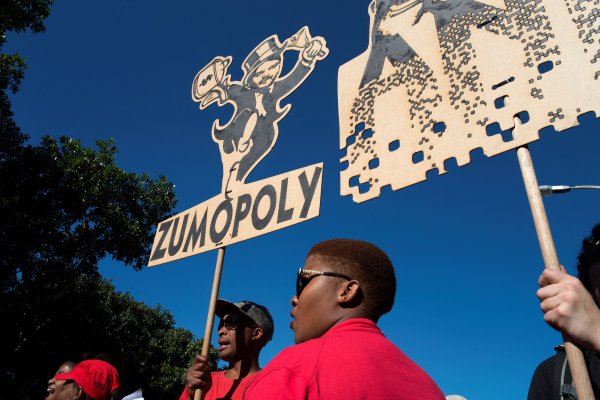 The British PR Firm Disgraced by a South African Racism Scandal
Next Up: Editor's Pick