The greatest conceptual art pieces ever mounted have been on exhibit for nearly 40 years now. The admission is free and the art is first rate, but you’re never going to get a chance to enjoy it — not unless you can figure out a way to travel nearly 13 billion miles from Earth.

It is Ann Druyan, writer, TV producer and widow of the celebrated astrophysicist Carl Sagan, who shares responsibility for the art the spacecraft carry and it’s she who calls them the greatest such pieces in history. That’s not an idle boast.

Both Voyagers carry what are known colloquially as The Golden Records — gold-plated copper disks engraved with analog signals that encode imagery and sounds and messages from Earth. There are greetings from the children of the world and from President Jimmy Carter, who was in the first year of his single term when the ships were launched. There are pictures too — dolphins leaping, a gymnast performing, a horse on a desert, a baby being born. And there is music: Louie Armstrong, Chuck Berry, Peruvian pan pipes, a Russian symphony, a Bulgarian folk song.

“This was our chance to create a kind of Noah’s ark of human culture,” Druyan told TIME in a recent conversation. “We could confer a kind of immortality on these works of music, on these images.

Druyan, Sagan and others helped choose what would be on the disks — essentially curating the entire planet and all of its cultures for extraterrestrial civilizations that might one day intercept the spacecraft and decode its secrets. That responsibility, she says, was daunting.

“In the heart of this experience [we were] searching for the best piece of Chinese music,” she says. “I mean what kind of hubris could we have that we could ever think that we, who knew nothing about Chinese music, could find this piece of music?”

But there was profound uplift in the project too. The disks are, as Druyan describes them, a “Noah’s Ark of human culture,” and nearly everyone who participated in creating them seemed to appreciate that fact. The artists whose songs were used licensed them for a token two cents apiece, granting what creative arts contracts commonly call “universal rights” — only this time it was meant literally. As the decades have unspooled, the cultural power of the disks has only grown. 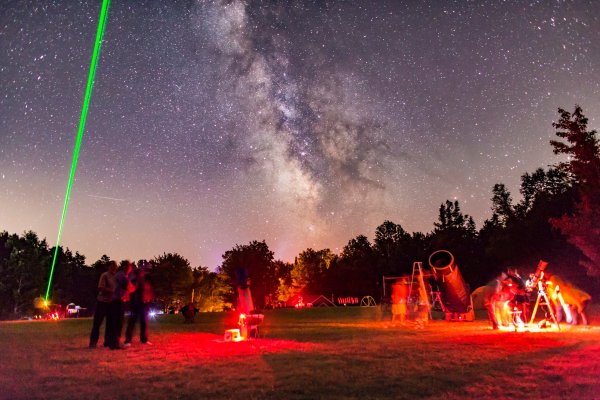 There May Be Another Black Hole in the Milky Way
Next Up: Editor's Pick