A rescue ship that has been focusing on saving African migrants attempting to cross the Mediterranean is now moving to Asia because of the desperate humanitarian crisis faced by Myanmar’s Muslim Rohingya minority.

Malta-based Migrant Offshore Aid Station Foundation (MOAS), which has rescued over 40,000 people who fell in distress during the perilous sea crossing since 2014, says it now intends to “deliver much-needed humanitarian assistance and aid to the Rohingya people.”

Its principal rescue ship, the Phoenix, will be sailing from the Mediterranean into the Bay of Bengal to provide help.

According to the United Nations Refugee Agency (UNHCR), over 123,000 Rohingya people, described as the world’s most persecuted minority, have fled the escalating violence in western Myanmar’s Rakhine state — a result of militant insurgency and a state military crackdown — to neighboring Bangladesh, since the latest round of fighting began on Aug. 25.

Witnesses have described random slaughter perpetrated by the Myanmar army and scenes of burning villages. Aung San Suu Kyi, the country’s State Counselor and de-facto leader, is facing increasing pressure to intervene in the crisis, and has faced a call from fellow Nobel Peace Prize winner Malala Yousafzai.

U.N. aid agencies have been unable to distribute vital supplies of water, food and medication into northern Rakhine state. According to the office of the U.N.’s resident coordinator in the country, who spoke to the Guardian, deliveries were suspended “because the security situation and government field-visit restrictions rendered us unable to distribute assistance. 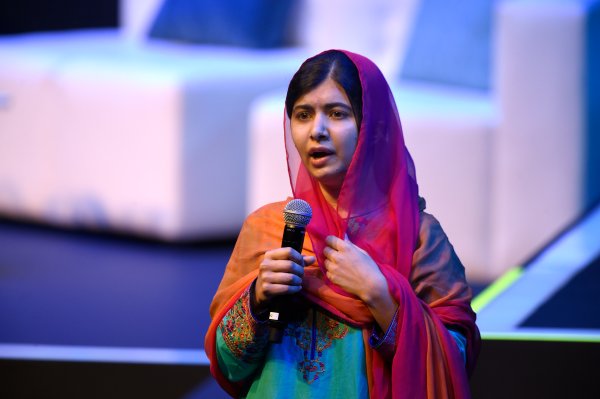 Malala Calls on Suu Kyi to Condemn Rohingya Abuse
Next Up: Editor's Pick