Review: A Promising Return to Twin Peaks Fell Victim to Itself

Only someone who’d never heard of Twin Peaks or director David Lynch would have expected this year’s revival, which concluded on Sunday night, to end neatly.

But even the initiated can’t be blamed for wanting a little more narrative.

It’s easier to describe how Peaks made one feel than, exactly, what happened. For this viewer, the moments of joy or curiosity or intrigue came close to being drowned out by long stretches of boredom. As the show began, it forcefully made the case that its story would not “make sense” in the ways to which we’re accustomed. It wasn’t hard to admire the ambition at key moments, but much more often it felt as though Lynch (who wrote the series with Mark Frost) was so determined to tell a story alienated from core storytelling values that he was sapping his own power to connect with a viewer.

I admire Lynch’s film work, particularly Blue Velvet, the suburban horror-noir that’s most like the original Twin Peaks at its best. That ABC soap used its bag of tricks — the backwards-speaking effect, the extradimensional “Black Lodge” — carefully, to build a story whose fundamentals, about the grief and trauma that comes after an untimely loss, were rock-solid. That the show eventually collapsed under the weight of trying to balance its vision with market pressures says as much about its time as premium-cable executives, anxious to build buzz, throwing at least a moderate pile of money at Lynch and refusing to interfere says about ours.

The new season of Peaks had flash. It had a profile as big among TV obsessives as Blade Runner (set to be revived on the big screen later this year) has had among film buffs, an astounding visual ambition and an inability to be anything but weird. It could only be said to be rebelling against TV norms if one believes Lynch has watched much of contemporary prestige TV. But while individual sequences rose to the high emotional resonance of the original series — the Log Lady (played by the late Catherine E. Coulson) announcing her own impending death or Sarah Palmer (Grace Zabriskie) shattering the picture of her much-missed daughter in grief and rage — they were unsupported by the show’s pure-cinema aesthetic, in which sequences only tangentially related to our core narrative played out thuddingly. (I was not particularly fond of the eventually gratuitously violent Tim Roth-Jennifer Jason Leigh sequences. You pick yours.) Beautiful moments glittered and fell away, risking being drummed out of memory.

What could be said to be the core narrative, following Kyle MacLachlan’s virtuosic performance as multiple individuals standing in the way of his 1990s character, Dale Cooper, finding his way back to our dimension, couldn’t find its foothold week-by-week. It found its way to an intriguing ending, one that pleasingly rejected conclusiveness, but the drudgery before surely sapped many viewers’ energy as much as it did mine. Rejecting conclusiveness is one thing. Largely rejecting narrative, and the pleasures it can provide, is a duller one.

A movie designed to be felt rather than understood can work. And boredom can be productive. But 18 hours is a punishing stretch of time, one the viewer really feels. It feels philistinic to fall short of a rapturous response for a show that’s not just based on a beloved property but one that’s, itself, been hailed as a late masterwork by an auteur who works less and less frequently. But it also feels silly to assume that every numbing moment of Peaks is important because he, with his co-writer, placed it there. There was a lot in the show that flat-out did not work, that stood in the way of the story Peaks once was, one that used its strangeness to entice an audience that might end up seeing a deeply human story onscreen. That the story of Laura Palmer felt less resolved than ever at the end of this season was a given; that we felt farther away from understanding what violent loss does to a community was a missed opportunity.

A word about that violence — I felt alienated from this season of Peaks, early on, by the show’s embrace of a sort of ultraviolence, one that seemed to take lightly the absolute annihilation of people through means gruesome and sickening. This feeling never went away, even after a narrative, about the birth of evil after the creation of the atom bomb, that reminded us majestically of Lynch and Frost’s moral sense and their bittersweet love for humanity. Why default to showing bullets riddling bodies, or faces and throats torn apart? It was both too much and deadeningly repetitive, a way for a pair of rich creative minds to seem out of ideas. It was the sort of thing that never could have aired on network TV, just as the rest of this bonkers, alternately beauteous and maddening, season of television never could have. Sometimes, limits to test spur greatness. ABC, leaning into the sort of network dramas that can be understood simply by reading their logline, would never have revived Twin Peaks. But I’d have loved to see that version. 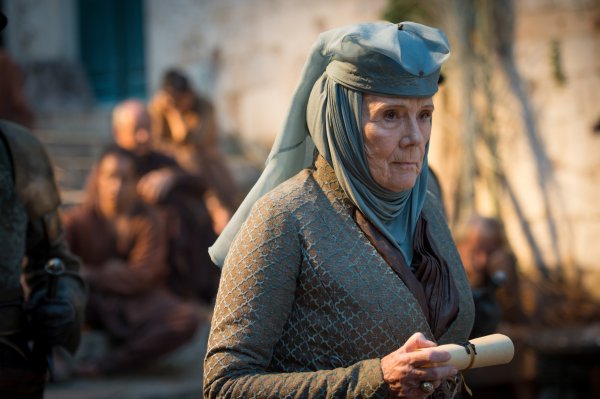 This 85-Year-Old Woman in a Game of Thrones Costume Slayed at Dragon Con
Next Up: Editor's Pick