In a statement posted to Twitter Sunday, the 20-year-old said the “world is waiting” for Suu Kyi, Myanmar’s state counselor and de-facto leader, to address the violence that has forced almost 90,000 Rohingya people to flee into neighboring Bangladesh.

“Over the last few years I have repeatedly condemned this tragic and shameful treatment,” she wrote. “I am still waiting for my fellow Nobel Laureate Aung San Suu Kyi to do the same.”

Yousafzai called for a stop to the violence, citizenship for the Rohingya people — who are effectively stateless, despite having lived in Myanmar for generations — and for her native Pakistan to offer shelter, food and education to Rohingya refugees.

“Today we have seen pictures of small children killed by Myanmar’s security forces. These children attacked no one, but still their homes were burned to the ground,” she said.

Read more: The Villages are Burning Down.’ Fear and Fire Send Rohingya Fleeing to Bangladesh

Yousafzai’s comments come amid an escalating humanitarian crisis in Myanmar’s western Rakhine state. The latest outbreak of violence in Rakhine erupted after Rohingya militants attacked police and paramilitary outposts on Aug. 25. Ensuing clashes between the Myanmar army and Rohingya insurgents killed about 400 people, according to government figures.

In the days since, the military has been engaged in what it describes as “clearance operations” against insurgents. Rohingya villagers who have fled to Bangladesh have spoken of a massacre perpetrated by the Myanmar military, and soldiers burning down their villages. Many have likening the situation to ethnic cleansing, with Turkish President Recep Tayyip Erdogan accusing Myanmar of committing genocide.

The Myanmar government blames Rohingya insurgents for burning the houses and deaths of civilians. Many of Rakhine’s Buddhists have also fled, seeking shelter in monasteries and schools.

The Guardian reported Monday that U.N. aid agencies had suspended deliveries of vital supplies — including food, water and medicine “because the security situation and government field-visit restrictions rendered us unable to distribute assistance,” according to the Office of the U.N. Resident Coordinator in Myanmar.

Yousafzai, who survived being shot in the head by the Pakistani Taliban after leading a campaign for women’s education, became the youngest ever recipient of the Nobel Peace Prize in 2014. Suu Kyi was awarded the prize in 1991 “for her non-violent struggle for democracy and human rights.” However, Suu Kyi has been widely criticized for failing to protect the persecuted Rohingya. 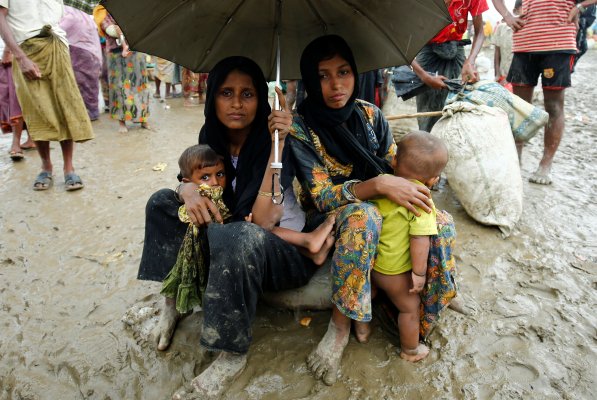 Nearly 400 Die as Myanmar Cracks Down on Rohingya
Next Up: Editor's Pick