A woman buys the final issue of The Cambodia Daily newspaper at a store along a street in Phnom Penh, Cambodia, Sept. 4, 2017.
Pring Samrang—Reuters
By Joseph Hincks

One of Cambodia’s most prominent independent newspapers, The Cambodia Daily, announced it was shutting down Sunday, as Prime Minister Hun Sen escalates a crackdown on critics ahead of national elections next year.

In its final edition Monday, the Daily led with the headline “Descent Into Outright Dictatorship,” along with a story on the arrest of opposition leader Kem Sokha, who was detained Sunday for “treason.”

The English-language paper was slapped with a multi-million dollar tax bill last month, which was supposed to be paid by Sept. 4. The Daily said the $6.3 million figure was “arbitrary” and not based on audits. “The Daily has been targeted with an astronomical tax assessment, leaks and false statements,” the paper said in a statement.

More than a dozen radio stations carrying opposition content, along with U.S.-funded broadcasters Radio Free Asia and Voice of America, have also been forced to close, the Daily reported. U.S. non-profit the National Democratic Institute and at least one other U.S. charity were expelled from the country.

In the run up to crucial general elections next year, strongman Hun Sen has sought to stifle opposition voices. Kem Sokha, the head of the opposition Cambodian National Rescue Party (CNRP) — which made surprise gains in the 2013 elections — was arrested early Sunday on allegations that he schemed with Washington, a perennial target of Hun Sen’s rants. In a statement, the Cambodian government alleged “a secret plan of conspiracy between Kem Sokha, his group, and foreigners that harms Cambodia,” according to AFP.

Hun Sen, a former Khmer Rouge commander who has ruled the country for three decades, often uses the courts to silence critics. In October, the government formally exiled Sam Rainsy — who led the CNRP before Sokha — ordering immigration officials to “take legal action to prevent this person from entering Cambodia” after he fled to France to avoid criminal defamation charges. 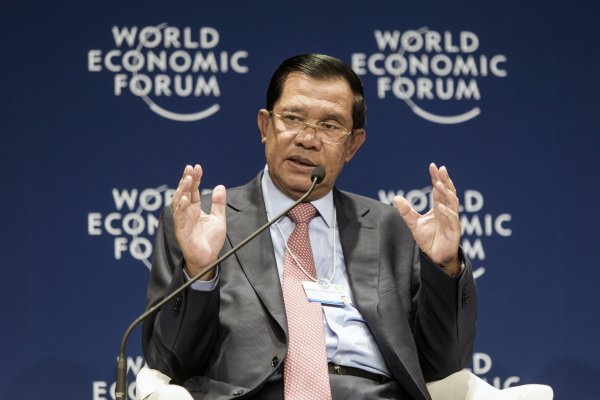