Common narratives about the U.S. role in World War II tend to concentrate on how men and women united behind the common cause of defeating the Nazis. But at times, the American women who served could feel as if the men were at war with them.

Women who served as pilots during the war say that some of their colleagues could end up grounded because they’d have trouble starting their engines, only to discover sugar or other material had been put in them.

“One time I was out, had a forced landing, because when I put on the second engine it hadn’t started,” recalls former Women Airforce Service Pilot Geri Nyman in the new Audible-produced audio documentary The Home Front: Life in America During WWII, narrated by Emmy and Golden Globe-winning actor Martin Sheen, a clip from which can be heard below. Taking apart the engine with an inspector revealed that it was filled with rags.

“I was sabotaged by somebody,” she claims.

Some women reported finding grass in their tanks or acid in their parachutes, or that their tires had been slashed very slightly so that they’d blow out in the air. Another pilot, Mary Ellen Keil, reported that some of her flight controls came lose from her plane after takeoff. Camp Davis on the southeast coast of North Carolina had the most reports, where at least 11 female pilots had to make forced landings.

Pilot Jacqueline Cochran personally discovered sugar in the gas tank of a plane that had crashed, killing her colleague Betty Davis, but feared she and her colleagues would lose their jobs if they reported it as such, according to Amy Goodpaster Strebe’s Flying for Her Country: The American and Soviet Women Military Pilots of World War II. Pilot Lorraine Zillner claimed these incidents happened because of men “who didn’t really feel that women had any business in a cockpit,” but none of these alleged cases were proven, historian Helena Page Schrader writes in Sisters in Arms: The Women Who Flew in World War II.

More than 1,100 non-military status Women Airforce Service Pilots were trained between 1942 and 1944 and served on 120 bases nationwide, helping augment a shortage of male pilots for certain tasks. Many were trained in Sweetwater, Texas, and flew planes to flight schools across the South that were used to train more pilots. They also “towed gunnery targets, transported equipment and non-flying personnel, and flight-tested aircraft that had been repaired before the men were allowed to fly them again,” according to Sarah Byrn Rickman, an expert on WASPs. At least 38 would die during the war, many from plane mechanical failures.

It would take more than three decades for the risk these women took for their country to be fully recognized, when in 1977, when President Jimmy Carter signed legislation that gave the special force military status so that they could receive the same benefits as male veterans. 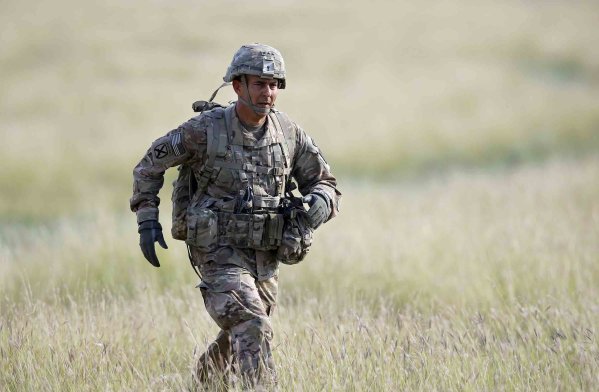 A U.S. Commander's Year on the Front Line Against ISIS In Iraq and Syria
Next Up: Editor's Pick