President Donald Trump called Hurricane Harvey a storm of “epic proportions” and said he hopes his administration’s response to the disaster will be regarded as a model.

“We want to be looked at five years, ten years from now, as this is the way to do it,” Trump said as he and his wife Melania received a briefing on the storm response at a fire station in Corpus Christi, Texas.

After visiting with local officials and volunteers in Corpus Christi, Trump is scheduled to fly to Austin for meetings with state officials. Republican Governor Greg Abbott, a Trump ally, greeted the president upon his arrival in Texas.

The trip will “lay the foundation for what we know is going to be a long recovery effort,” White House press secretary Sarah Huckabee Sanders told reporters traveling with the president on Air Force One. Abbott said at the briefing that the Trump administration’s response so far to the storm has been “very effective.”

“We’ll congratulate each other when it’s all finished,” Trump said.

A deluge of rain and rising floodwaters from Harvey has left parts of Texas immersed, forcing dramatic rescues from waterlogged homes and cars and shutting down major thoroughfares. Now a tropical storm, Harvey made landfall near Corpus Christi on Friday night as a Category 4 hurricane with sustained winds of more than 120 miles per hour.

The storm has drifted back toward the Gulf of Mexico and is poised to regain strength before crashing ashore again, this time on the Texas-Louisiana border.

Trump on Monday promised swift emergency funding to help Texas recover from the hurricane, though Republican congressional leaders haven’t yet sent clear signals on how they will proceed. The full scope of damage isn’t yet known with rain expected to last several more days.

“The real number, which will be many billions of dollars, will go through Congress,” Trump said Monday at a news conference. “It will happen very quickly.”

Harvey’s cost could reach $42 billion when including the impact on the labor force, power grid, transportation and other elements that support the region’s energy sector, Chuck Watson, a disaster modeler with Enki Research, said Tuesday. David Havens, an insurance analyst at Imperial Capital, said the final tally might be as high as $100 billion.

Republican leaders haven’t committed to a swift debate on emergency funds. A spokeswoman for House Speaker Paul Ryan of Wisconsin, AshLee Strong, said Congress will wait for “a formal request for resources from the administration.”

Texas Senator Ted Cruz is among Republicans who have previously insisted that aid for natural disasters be offset by spending cuts. He joined Trump at his Corpus Christi briefing.

Congress returns Sept. 5 from its August recess, when it will face a pileup of urgent tasks, including raising the nation’s debt ceiling and passing a stopgap measure to fund the government after Sept. 30. The House is only scheduled to be in session for 12 legislative days in September, which compounds its challenge. Another potential obstacle is demands by House conservatives to cut spending elsewhere to pay for Harvey aid.

Trump has sent more than two dozen tweets about the storm in recent days and he has appeared eager to get to Texas to view the damage himself. He plans to return to a different part of the state on Saturday.

Republicans are cognizant of President George W. Bush’s widely criticized handling of Hurricane Katrina in 2005, and some have urged Trump to take a more proactive approach. 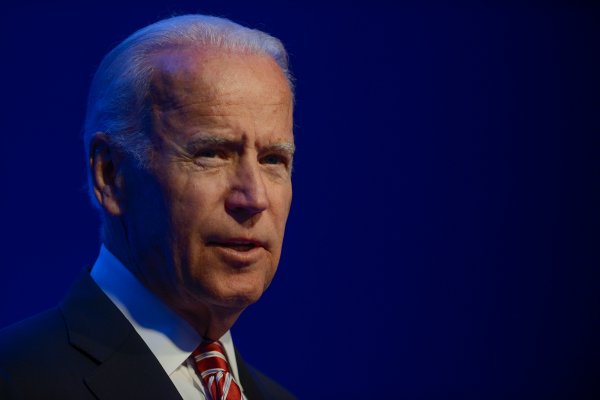 'A Battle for the Soul of This Nation.' Joe Biden Tears Into President Trump's Charlottesville Response
Next Up: Editor's Pick