A man was supposed to have a nice day surfing in the waters off of Cathedral Rocks beach on the outskirts of Melbourne, Australia, but after a great white shark attack, he ended up having what he dubbed “a really, really unpleasant morning.” His morning may have been ruined, but his powers of understatement remain intact.

Marcel Brundler was in the water when he noticed a dolphin swimming near by, according to Australia’s ABC News. As if acting out a plot from every shark attack movie ever, the surfer soon realized that was no dolphin. “I realized fairly quick because it was more than half a metre wide, with a massive dorsal fin, and it looked at me,” he told ABC News. “Then it kind of dived off, came back and circled me, and took a fair notch out of my board, circled me again, then it got me on my wettie, it got me on my hip.”

Brunder was able to use his surfboard and fists to fend off further attack from what is believed to be a great white shark. He credits the fact that he was wearing a thick wet suit for being able to walk away from the attack with just a few bite marks on his surfboard, “a little scrape on [his] skin.”

Quite an “unpleasant morning.” 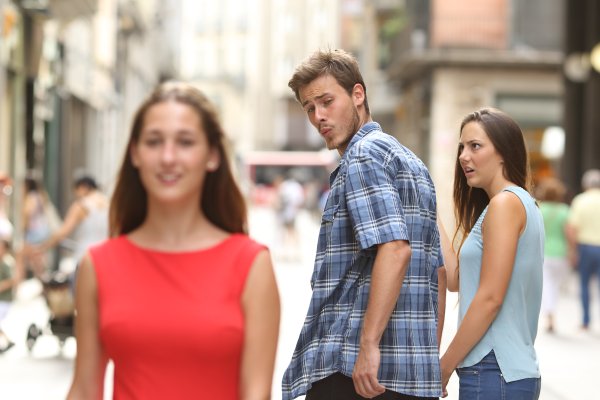 Here's the Backstory of That Viral 'Guy Looking Back' Meme
Next Up: Editor's Pick