What Happens When a Hurricane Hits a Hospital

When a hurricane hits Houston, it also threatens some of the world’s leading medical care.

South Texas has been enduring the worst storm to hit the U.S. in years in Hurricane Harvey, with flooded streets expected to persist for days. With more than 10 million patient visits each year, and more than a dozen hospitals and medical facilities, the Texas Medical Center (TMC) in the heart of Houston is the largest medical complex in the world. The largest children’s hospital, as well as the largest cancer hospital, are also housed in the city.

As Harvey gathered steam before making landfall late Friday night, the more than 106,000 TMC employees were prepared, but no one could have predicted the sheer volume of water that would inundate the city. The lobby of MD Anderson Cancer Center resembled a wading pool, and some of TMC’s facilities effectively ended up in a moat, surrounded by water that prevented anyone from getting in or out.

But for the patients and staff inside, it was pretty much business as usual. Most of the TMC hospitals adopted a shelter-in-place strategy, which meant they called in staff prior to the storm and divided them into shifts of working and rest, on the premises, so they wouldn’t have to leave the hospital. Previous experience from storms suggested this was the best strategy; evacuating patients is a tricky process, since sometimes the evacuation procedure can be more medically dangerous if traffic jams out of a vulnerable area mean people will be stuck in ambulances or makeshift mobile care units for hours on end.

Read more: How you can help the victims of Hurricane Harvey

Many hospitals in the area cancelled elective surgeries and non-essential appointments, in an effort to conserve supplies and resources. “The main reason for that is we want to be sure we have enough anesthesia support, and nursing support to continue to do surgeries,” said Tom Flanagan, vice president of emergency management at Memorial Hermann Health System, which is located in the TMC complex.

Other priorities are patients who need chemotherapy treatments or dialysis, which need to be given at designated times to be most effective. Those patients were contacted one by one to ensure that they would be in the hospital before the storm hit, able to come to the hospital after the storm passed, or to find another facility for their treatments.

At Texas Children’s Hospital, staff took turns on 12 hour shifts beginning Friday night to care for the 600 patients across three facilities. Doctors also called in women with high risk pregnancies who were due to give birth imminently as a precaution, and housed them in the Marriott next door to the main campus so they could be at the hospital quickly when their labor began. That meant their babies would also have access to the neonatal ICU if they needed it, rather than risking a dangerous ride through the storm to get to the hospital. “We assessed every patient, every pregnant mom, knowing that if they delivered and were unable to get to us, it would be devastating,” said Cris Daskevich, senior vice president at Texas Children’s.

Learning lessons from previous hurricanes and tropical storms Katrina (2005), Rita (2005) and Allison (2001), all of which deluged Houston with floodwater and cut off patients from needed medical care, the TMC facilities constructed so-called submarine doors to protect their basement floors from incoming water. On Sunday, Texas Children’s and Memorial Hermann Hospital closed theirs, which helped to keep the facilities dry.

Read more: The Story Behind the Photo of Nursing Home Residents Trapped by Hurricane Harvey

But while the hospitals were relatively dry, they were surrounded by water, and emergency personnel and staff could not reach the facilities for several hours at the peak of the storm on Saturday and Sunday. “We were on stand by and waiting so that when the roads were clear, we were ready to receive patients again,” Daskevich said.

During the storm itself, Flanagan said, there weren’t many emergencies. “We don’t usually see a lot of injuries or emergencies during the height of the storm,” he said. “But right after the storm passes, when people are allowed to go back and assess the damage, we start seeing storm-related injuries.” 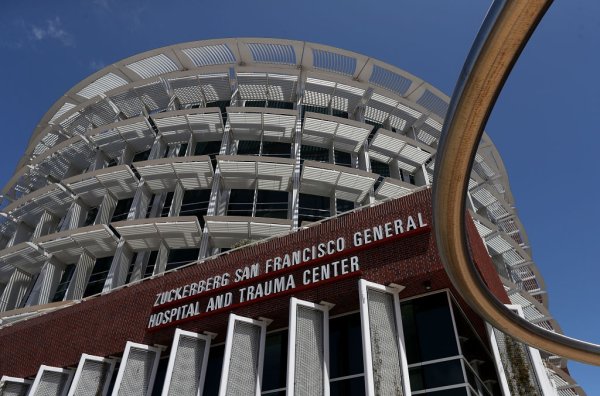