A Houston furniture store is offering to help the thousands of displaced Texas residents that have nowhere to stay following the catastrophic flooding and dangerous conditions created by Hurricane Harvey.

Gallery Furniture, a Houston-based chain store, opened two of its locations — one north of downtown, and the other west of the city in Richmond, TX — to residents seeking shelter as the historic tropical storm forced them out of their homes. In a post on Facebook on Sunday, the company announced it would have food, beds and restrooms available for anyone in need — including kenneled pets.

The furniture store is also using its largest moving truck to help rescue people displaced by the floods, according to another Facebook post from the company.

Gallery Furniture owner Jim “Mattress Mack” McIngvale has long been known for his charitable actions, according to the Houston Chronicle. “We hope to give them some comfort in this incredibly difficult time,” MacIngvale said in a statement to the Chronicle.

McIngvale did not immediately respond to an interview request for TIME.

A number of other venues have also opened as shelters in the area, including Houston’s George Brown Convention Center, which has 1.8 million square feet of space. And aside from local businesses, Americans from all over the country have been donating to various charities that are on the ground. You can find a list of the charities and how to donate here.

About 30,000 people will seek shelter as a result of the disastrous flooding, the Federal Emergency Management Agency said, according to Reuters. FEMA anticipates more than 450,000 people will ask for disaster assistance on top of the thousands of people that have already been rescued from their homes. Total rainfall could reach a historic high of 50 inches, according to the National Hurricane Center. 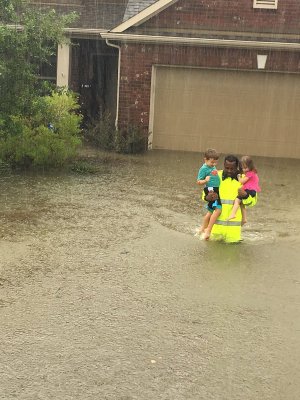 The Story Behind the Photo of a Texas Cop Carrying 2 Kids Through Waist-Deep Water
Next Up: Editor's Pick