Life-threatening and catastrophic flooding created by the aftermath of Hurricane Harvey has left people in southeast Texas stranded in their homes — and water levels are only expected to rise as more rain falls over the region over the next few days.

Residents have been warned not to drive on flooded roadways and to stay in their homes as water levels in some areas could rise to a historic 50 inches, according to the National Weather Service, making it difficult for them to find safety.

A number of emergency teams and volunteers have rescued thousands of people from the devastating disaster unfolding in Houston, the nation’s fourth-largest city, and the cities and towns surrounding it. Emergency services like 911 have been “inundated” with calls and rescuers have been receiving continual calls for their aid as roads turn into rivers and speedboats, kayaks and canoes replace cars.

Houston Police Chief Art Acevedo said Monday morning that 2,000 people have been rescued so far, according to the Associated Press. Another 185 urgent rescue requests are still pending, but should be completed by the end of Monday, he said.

Dramatic footage captured by the AP over the weekend shows all kinds of rescues taking place — children wearing life vests being carried onto speedboats in Houston and a man and his dog getting airlifted into a U.S. Coast Guard helicopter.

People stranded by the flooding have also taken other measures to be rescued. In an interview with Good Morning America on Monday, Houston resident Aishia Nelson called in from the roof of her apartment building without food or water. “Please help us,” Nelson said. “I’m scared.”

In Dickinson, TX, more than a dozen nursing home residents were stuck as floodwaters rose, submerged waist-deep in the water. An image of the dire situation shared by Tim McIntosh, the son-in-law of the owner of the nursing home went viral, and emergency officials rescued them on Sunday afternoon.

Hurricane Harvey was downgraded to a tropical storm on Saturday after it moved inland, where it has created potentially catastrophic conditions that officials have described as unprecedented. The storm has left at least two people dead and several others injured, and many residents who have escaped the flooding have retreated to safe spaces for shelter. Houston Mayor Sylvester Turner opened the George Brown Convention Center in the city as shelter, and Airbnb has offered free housing for those affected by the flooding. 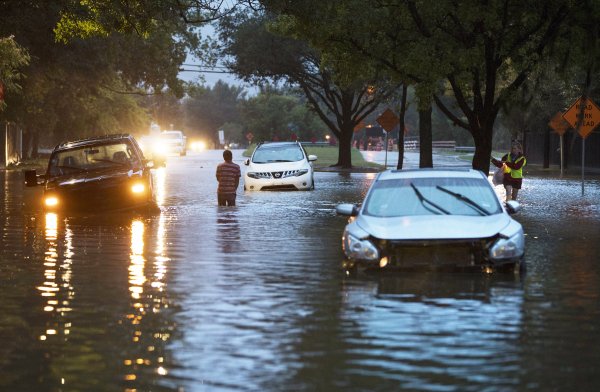 ‘Please Help Us.’ Houston Woman Trapped On Roof Interviewed on Live TV
Next Up: Editor's Pick