How Texas Rebuilt After the Deadliest Hurricane in U.S. History

Men use ropes to pull away the debris of houses in order to look for bodies, after the Galveston Hurricane of 1900.
Library of Congress/Corbis/VCG—Getty Images
By Olivia B. Waxman

Hurricane Harvey, which the New York Times reports has so far been blamed for at least 10 deaths since making landfall in Texas on Friday night, is expected to be “probably the worst disaster the state’s seen,” in terms of how involved recovery efforts will be, William “Brock” Long, administrator of the Federal Emergency Management Agency (FEMA), said Sunday.

As heavy rain and flooding continues, the question of that recovery looms large — but this is not the first time that parts of Texas have faced such a question.

Over the weekend, civil-engineering experts and officials in the port city of Galveston expressed relief that the barrier island did not get squarely hit as it did by Hurricane Ike in 2008 and that the area’s seawall had not been breached, and city officials confirmed to TIME on Monday that the city has not been notably affected by the storm. That seawall is a measure of protection that the city has had for more than a century, and for good reason. On Sep. 8, 1900, a Category 4 hurricane boasting a 15.7-foot-tall storm surge made landfall, killing at least 6,000 of its 37,000 residents and destroying more than 3,600 buildings, according to the Galveston County Daily News. That storm is still considered the deadliest hurricane in U.S. history.

Now, as Texas confronts another tragic natural disaster, the lessons of that time have once again come into play. Rebuilding Galveston was a matter of human will, high costs, engineering feats and more.

“Sunday, September 9, 1900, revealed one of the most horrible sights that ever a civilized people looked upon. About three thousand homes, nearly half the residence portion of Galveston, had been completely swept out of existence,” wrote Galveston weather bureau meteorologist Isaac Cline, whose wife, pregnant with their fourth child, was swept away during the storm. “The correct number of those who perished will probably never be known, for many entire families are missing. Where 20,000 people lived on the 8th not a house remained on the 9th, and who occupied the houses may, in many instances, never be known.”

The horrors of the storm were visceral. Among the dead were 90 of the 93 orphans at St. Mary’s Orphanage and the 10 nuns in charge. Officials tried to dump some of the corpses 18 miles into the Gulf of Mexico, but when the bodies washed ashore, the city’s relief committee ordered they be burned. So-called “dead gangs” set them aflame. As Erik Larson described the scene in his history of the disaster, Isaac’s Storm, “The fires began almost at once, with the assistance of the city’s fire department. Soon the nights were rimmed with the orange light of countless pyres. The air stank of death for weeks. Human ash sifted from the sky.”

Prior to the storm, the wealthy city of Galveston had been one of the nation’s busiest ports. After the storm, it was saddled with about $20 million in damages, which would amount to more than $700 million in today’s dollars. Donations poured in from New York’s millionaires in the wake of the storm, as well as from concerned citizens as far as Germany and South Africa. Clara Barton, the 78-year-old founder of the Red Cross, arrived two weeks later to restart the orphanage and coordinate the distribution of donated goods, especially loans to rebuild homes. (Some efforts to restore public order were more haphazard; TIME reported in 1938 that one of the biggest leaders in preserving public order during the recovery was a rabbi who patrolled the area “with a shotgun over his shoulder and a bottle of whiskey in his pocket.”)

In additions to efforts to lift spirits and bodies from the rubble, this city on a sandbar also had to be literally lifted to protect the downtown area from future storms. Engineers built a roughly 17-foot-tall, three-mile-long concave seawall designed to send waves back where they came from (that’s now about 10 miles long). About 500 buildings were raised by as much as 18 inches in an effort to match the height of the seawall, according to TODAY’s Al Roker, who also wrote a history of the hurricane, Storm of the Century.

The recovery would take 12 years, but proved it was “worth the investment” during a 1915 hurricane when only eight died, according to Elizabeth Hayes Turner, co-author with Patricia Bellis Bixel of Galveston and the 1900 Storm. Experts say, however, that the Galveston that emerged from the rubble didn’t have the same status as a shipping center as it did during its heyday. As TIME reported shortly after Hurricane Ike, “Partly because of the storm and partly because oil was discovered in Houston soon afterwards, Galveston never really recovered. Texas’ economic momentum shifted, and Galveston became a beach town.”

Another compounding issue was the fact that the U.S. was also still figuring out its approach to predicting devastating storms at the turn of the 20th century.

The city’s weather bureau, helmed by Cline, was fairly new in Galveston, having only been started in 1889. Cline would become notorious for having argued that the city was impervious to such storms, but there was also a critical misunderstanding of the storm’s trajectory. As NOAA explained in a history of the event, “Since wireless ship-to-shore communications were not yet available, there was no way to know just when and where the hurricane would strike.”

Moreover, the unique political climate of 1900 and bias against Cuban forecasts also prevented meteorologists from properly warning the public. Despite the fact that the Cubans had pioneered the art and science of hurricane prediction, the U.S. government, which had been controlling the island since 1898, also sought to control weather forecasting. “To the Americans, Cuban forecasts seemed hysterical…the superstitious lore of a backward people,” Roker wrote in 2015 for American History magazine. To make forecasts sound less panicked, the bureau’s director Willis Moore even went so far as to ban the words “tornado,” “cyclone,” and “hurricane,” and “banned direct communication between the U.S. Weather Bureau’s office in Havana and the office in New Orleans,” requiring Havana to report directly to Washington — thus blocking an important warning from top Cuban meteorologist Father Lorenzo Gangoite, who believed a hurricane was heading towards the Texas Gulf Coast.

Even now, despite technological advancements that have enhanced forecasting capabilities more than a century later, meteorologists are still never totally sure what hurricanes will do once they make landfall. Still, the necessity of adequately warning citizens is generally recognized; for example, new mandatory evacuation orders were issued Monday afternoon for the hardest hit places around Houston, such as Dickinson.

With Texas bracing for more from Harvey, perhaps it can be a comfort to know that the state has rebuilt before, with the help of caring citizens, creative engineers and technological improvements. Even if things were never exactly the same for Galveston, the city persisted. That dedication is something that Texas will once again be able to put to good use in the recovery yet to come.

As FEMA chief Long explained, “The recovery to this event is going to last many years to be able to help Texas and the people impacted by this event achieve a new normal.” 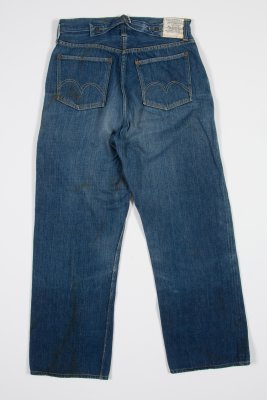 These Pants May Be the Oldest Pair of Women's Jeans in the World
Next Up: Editor's Pick