The summer of 2017 was great for moviegoers, and not so great for the industry. While the box office is on track to hit its lowest numbers in over a decade, most weekends provided a bounty of varied, and just plain good films to choose from — even, and perhaps especially, among the blockbusters. New movies out this fall bode similarly well. This season will see new films from Darren Aronofsky (Black Swan), Todd Haynes (Carol) and the directors of Little Miss Sunshine. Robert Redford and Jane Fonda make sparks onscreen for the first time since 1979, and Blade Runner finally gets a sequel. It’s a slate that’s bound to keep the summer’s momentum going, all the way through to awards season. Here are TIME’s picks for the best of fall 2017 movies.

What to know: The new adaptation of Stephen King’s 1986 novel — which confirmed that, yes, clowns are as terrifying as you always thought they were — will please fans of the ‘80s-pre-teen nostalgia of Stranger Things. (The biggest inspiration for which, of course, was It.)

What to know: The less you know about the plot, the more terrifying this thriller from Black Swan director Darren Aronofsky will be. Suffice it to say, this story about a couple whose cloistered life is cramped by unexpected visitors presents J-Law as you’ve never seen her.

Battle of the Sexes

What to know: Stone plays tennis champ and activist Billie Jean King opposite Carell’s clownish Bobby Riggs in this true story about their high-stakes 1973 match, from the directors of Little Miss Sunshine.

What to know: The sequel to the winking, ultra-violent 2015 spy blockbuster revisits the formula that earned the original more than $400 million worldwide — this time with even more star power.

What to know: Dame Judi plays a cantankerous Queen Victoria, opposite Bollywood star Fazal, in this recently unearthed story about Her Royal Highness’s friendship with a young Muslim servant from India.

What to know: Where Patriots Day took an ensemble approach to the events leading up to and following the 2013 Boston Marathon bombing, the Gyllenhaal-produced Stronger brings a tight focus to the story of Jeff Bauman, who lost his legs waiting for his then-fiancée (played by Maslany) to cross the finish line.

What to know: If you can’t wait until 2019’s Top Gun 2 to see Cruise back in the cockpit, you can watch him take flight as Barry Seal, a real-life TWA pilot who became a drug and arms smuggler in the 1970s and ‘80s. This is Cruise is at his most swashbuckling Cruisiest — this time with a Louisiana drawl.

Our Souls at Night

What to know: Two Hollywood legends reunite onscreen for the first time in nearly three decades (and the fourth time ever) in this adaptation of Kent Haruf’s 2015 novel about two widowed neighbors finding love after loss.

What to know: This visually stunning sequel by Arrival director Denis Villeneuve (and producer Ridley Scott, who helmed the original) picks up 30 years after Ford’s Rick Deckard flew off into the sunset (depending, that is, on which ending you subscribe to).

What to know: Writer-director Sean Baker’s gorgeous follow-up to 2015’s Tangerine — which was shot entirely on an iPhone — uses more sophisticated equipment to achieve similarly breathtaking results. The story is told from the perspective of children living in rundown motels close enough to Disney’s Magic Kingdom to bask in the glow of its fireworks, but by every other measure a world apart.

What to know: After playing Jackie Robinson (42) and James Brown (Get On Up), Boseman takes on another role drawn from history, playing Supreme Court Justice Thurgood Marshall. Rather than a cradle-to-grave biopic, the movie focuses on a moment early in Marshall’s career when, as a lawyer for the NAACP, he partnered with a Jewish lawyer (Gad) to defend a black man accused of raping a white woman.

What to know: Gleeson is popping up everywhere as the calendar marches toward 2018 (see: mother!, American Made, Star Wars), but he’s headlining this one, the story of Winnie-the-Pooh writer A.A. Milne and the inspiration he drew from his son.

The Meyerowitz Stories (New and Selected)

What to know: In Noah Baumbach’s comedic saga about familial bonds, sibling rivalry and parental favoritism — in other words, how parents mess up their kids and what hang-ups those kids carry with them into adulthood — Sandler shines in his most dramatic role since Funny People.

What to know: Can’t wait until Justice League for more Wonder Woman? This story about the character’s origins might satisfy that craving in a different way. But it’s not so much about the superhero as it is about the psychologist-inventor-author who conjured her and his polyamorous arrangement with his wife and former graduate student.

What to know: In this tender tale from Carol director Todd Haynes — adapted from a novel by The Invention of Hugo author Brian Selznick — two children, separated by 50 years, travel to New York City in search of someone important to them.

What to know: This drama drawn from headlines tells the story of the elite firefighters who battled an Arizona wildfire in 2013 and the 19 men who lost their lives in the process. Director Joseph Kosinski is best known for his 2010 Tron sequel and is attached to the Top Gun sequel due in 2019.

What to know: George Clooney directs a Coen brothers script about a couple (Damon and Moore) in a seemingly placid 1950s suburb whose lives are thrown into disarray after a home invasion. Clooney has emphasized the film’s darkness and described it as “an acid trip.”

Thank You For Your Service

What to know: Three soldiers return from Iraq and attempt to reintegrate into their lives at home, but PTSD — and the lurching pace at which much-needed government services arrive (or don’t) — render their new mission nearly impossible.

What to know: The drama explores young Cathleen’s (Qualley’s) questions of faith, love and abnegation as she trains to be a nun against the backdrop of a reforming Vatican in the early 1960s.

What to know: This Marvel threequel, billed as a Thor-Hulk buddy picture, has a lot going for it, from the introduction of quirktastic director Taika Waititi (the most successful filmmaker at the New Zealand box office), goth Cate Blanchett as a new villain, retro neon ‘80s vibes and Jeff Goldblum in cerulean face paint.

What to know: Dazed and Confused and Boyhood director Richard Linklater turns his attention to a later phase of life in this story about three Vietnam veterans reuniting to bury one’s son, killed in action 40 years after they returned from their own war.

Murder on the Orient Express

What to know: Agatha Christie’s 1934 mystery novel has already been adapted for the big screen — in 1974, by Sidney Lumet, to critical acclaim and an Oscar for Ingrid Bergman. Here, director (and star) Branagh, no stranger to adaptations, rounds up an imposing ensemble for his own take on the material.

What to know: In a new film by the director of In Bruges and Seven Psychopaths, McDormand plays a bereaved mother on a mission to find her daughter’s killer and shame the police chief, played by Harrelson, for dragging his feet on the investigation. Among her tools: a mouth that ought to be washed out with soap, molotov cocktails and the creative use of three billboards.

What to know: Under the direction of Rob Reiner, Harrelson plays Lyndon B. Johnson in his ascent to the presidency. The movie sees Harrelson’s LBJ weigh the political and moral costs of carrying on John F. Kennedy’s vision for civil rights amid mounting pressure from fellow Southern politicians to maintain the status quo.

What to know: Greta Gerwig steps behind the camera for her directorial debut, which centers on a rebellious student (Ronan) looking to escape her small-town California life.

What to know: The DC Extended Universe continues world-building with this meeting of its most powerful superheroes — Batman, Superwoman, Wonder Woman, the Flash, Aquaman and Cyborg — who join forces to fight the evil Steppenwolf and his army of Parademons.

What to know: In this family-friendly adaptation of R.J. Palacio’s bestselling 2012 novel, Roberts and Wilson play the parents of a boy (Tremblay, who broke out in Room) whose face looks different from those of his peers.

What to know: A hit at Sundance, Dee Rees’ epic tale of the intersecting paths of two families living on the same slice of Mississippi farmland in the 1940s — one, the white landowners and the other, black sharecroppers — explores the legacy of slavery and the reality faced by soldiers returning to the Jim Crow South after serving their country abroad.

What to know: For his directorial debut, screenwriter Aaron Sorkin adapts the memoir of Molly Bloom, who ran an underground poker empire frequented by A-listers, mobsters and professional athletes.

What to know: Pixar’s latest entry, a musical in which a boy and his dog wander the Land of the Dead, features an all-Latino voice cast and songs by Frozen alums Robert Lopez and Kristen Anderson-Lopez.

What to know: Oldman disappears into the visage of Winston Churchill in this drama about his ascension to power during a hostile political moment. Incidentally, its depiction of behind-the-scenes geopolitical maneuvering as Nazi forces closed in on western Europe makes it a great companion piece to Dunkirk.

Call Me By Your Name

What to know: This story about a teenage boy (Chalamet) falling in love for the first time, with a young scholar (Hammer) spending the summer at his family’s Italian villa, is about more than just a sexual awakening. It’s about the pain, joy and confusion of growing up. 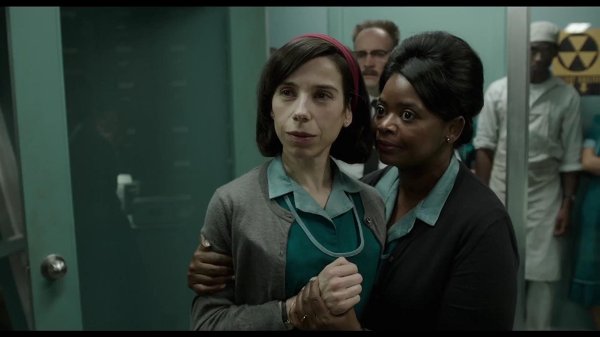 Review: The Shape of Water Is a Poetic Love Letter to a Monster
Next Up: Editor's Pick