MTV is already making a statement at Sunday night’s Video Music Awards, inviting six transgender military members to attend the event and walk the signature blue carpet alongside the president of GLAAD.

“Any patriot who is putting their own life at risk to fight for our freedom and stand for equality is a hero at MTV, and to young people everywhere,” said MTV president Chris McCarthy in a statement provided earlier, according to Billboard.

“Historically, the VMAs have been a huge platform for social issues that are currently happening, so being able to have that platform and share our stories is important to us,” retired Army vet Ireland told Billboard ahead of the event.

On Friday, President Trump made a formal order for the Department of Defense to stop allowing transgender individuals to openly serve in the U.S. military. The order means the military cannot accept new transgender troops and has six month to plan how to handle transgender troops currently serving openty, the White House said.

Although there is no official number for how many transgender people serve in the military, a 2016 commissioned by the RAND Corporation estimated between 1,320 and 6,630 transgender service members are in active duty and another 830 to 4,160 are in the reserves. 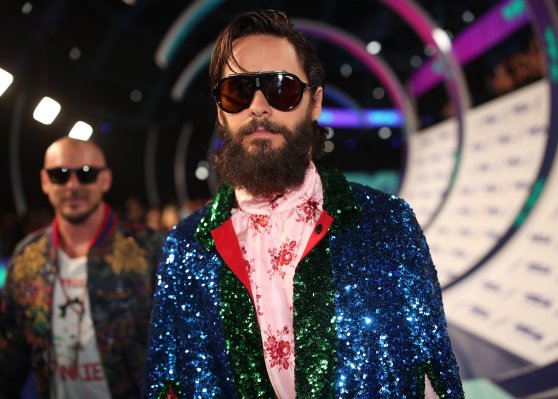 The Internet Loves Jared Leto's Sequined Cape at the VMAs Red Carpet
Next Up: Editor's Pick