Going viral can actually help. Take for example this photo of an elderly woman legs vanished in the waist high as the flood waters overwhelmed a La Vita Bella Nursing Home in Dickinson Texas due to Hurricane Harvey in August. The owners of the living center posted it to Twitter asking for help. Rescue teams answered with air lifts. It was one of the many ways people harnessed the power of social media after disaster hit this year.
Trudy Lampson
By Kara Milstein and Sophia Rosenbaum

An elderly woman’s legs disappeared under waist-deep water from Hurricane Harvey as the storm’s flooding flowed into the La Vita Bella Nursing Home on Sunday in Dickinson, TX.

The unidentified woman wasn’t the only one submerged in the rising waters pouring into the nursing home. A now-viral photo first shared on Twitter showed at least six other women and a cat trapped in the same green-colored water that filled the room.

Kim and Tim McIntosh, whose mother owns the assisted living center, received the photo around 8 a.m. Sunday. “Then no more contact,” they said in an email.

The McIntosh’s decided to post the photo on Twitter shortly after, pleading with emergency services for help. “We thought the situation was dire,” they said.

Emergency officials updated the McIntosh’s every 30 minutes until everyone was out safely. “We were very fortunate and are thankful for all the retweets, media contacts, and especially the promptness of Galveston emergency services along with the National Guard. All together, they saved many lives today,” they added in the email.

Hurricane Harvey made landfall in Texas Friday, and though it was downgraded to a tropical storm Saturday, it brought unprecedented flooding to southeast Texas. Rain is expected to continue through the middle of this week.

“The breadth and intensity of this rainfall are beyond anything experienced before,” the National Weather Service said in a statement Sunday. “Catastrophic flooding is now underway and expected to continue for days.” 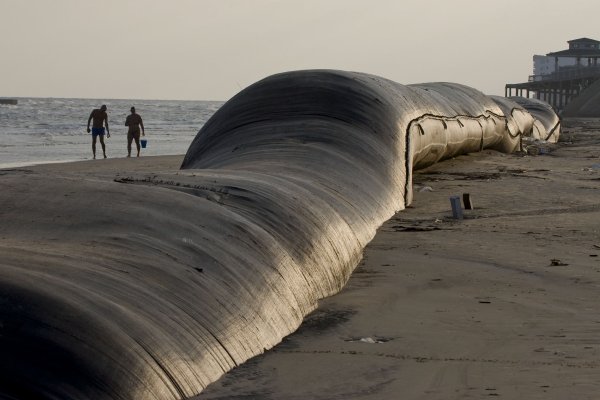 Harvey Likely to Be 1st Hurricane to Hit Texas Since 2008
Next Up: Editor's Pick