Fitbit's First Smartwatch Is Finally Going After the Apple Watch

Fitbit’s devices have straddled the line between fitness tracker and smartwatch for years. No longer — the company’s first bona fide smartwatch, dubbed the Fitbit Ionic, will cost buyers $299, and it arrives this October.

Fitbit is betting the Ionic’s health-focused features will differentiate it from natural rivals like Apple, though Cupertino has focused more closely on health in recent years, adding significant new features to the Apple Watch. But Fitbit’s Ionic will come with something special: an enhanced heart rate reader that includes a relative SpO2 sensor capable of tracking the amount of oxygen in the blood over time. Fitbit hopes this technology will eventually allow it to detect conditions such as sleep apnea, a serious disorder in which someone’s breathing is interrupted while they slumber.

Fitbit says the Ionic is more about improving the quality of the data its devices gather rather than just growing its slice of the wearables market. “We’ve seen the need for more and more advanced sensors while still maintaining long battery life,” Fitbit CEO James Park told TIME. “The only way we felt we could do that was with a larger form factor device. So that drove the thinking behind developing a smartwatch.”

Read more: Fitbit May Have a New Way to Detect an Irregular Heartbeat

The other noteworthy health-angled addition is the device’s “Fitness Coach,” which guides users through workouts right on the wrist. When opening the app on the watch, users can choose between routines such as “10 Minute Abs” or “7 Minute Workout.” During a workout, images, animations and timers on the watch along with audio prompts guide wearers through each exercise. Once the workout is finished, users can rate its difficult, prompting the digital coach to tweak future sessions accordingly. The new feature is more thorough than the comparably static FitStar guided workouts available on Fitbit’s Blaze, the company’s not-quite-a-smartwatch released in early 2016. The Ionic’s new coach shows real people demonstrating the workout on the watch’s screen, unlike the Blaze’s FitStar. The older watch also doesn’t offer audio coaching and tailored workouts like the Ionic will.

Fitbit’s Ionic also includes built-in GPS tracking, unlike the Blaze which depends on the signal from a nearby smartphone. It’s water resistant up to 50 meters, too, bringing it par with the Apple Watch. As such, Fitbit has added a swim mode that can detect calories burned, time elapsed and laps if you’re up for a pool workout. It can also pause a workout when it detects the wearer has stopped running, though that’s another feature the Apple Watch has had for some time. Of course the Ionic includes many of the things prior Fitbit products could do, like automatically knowing when you’re exercising or keeping tabs on your stages of sleep.

While Fitbit considers its products health-focused, it wants buyers to use the Ionic for more than just activity or exercise. The smartwatch will support NFC (near field communication) for making wireless mobile payments, can display app notifications and has its own selection of apps accessed through a new App Gallery — the company’s equivalent of Apple’s App Store.

Thus far, Fitbit has worked with Accuweather, Starbucks, Pandora, and social fitness outfit Strava on apps for the Ionic, but the company is offering a software development kit so developers can build their own apps and watch faces. That’s thanks in part to Fitbit’s acquisition of troubled smartwatch startup Pebble last year. “The ability for third party developers in the medical community to write apps was incredibly powerful,” says Park. “And we weren’t able to enable that. So acquiring Pebble just to unlock that use case was incredibly important.”

As a physical object, the Ionic looks like a mashup of the company’s Surge and Blaze fitness watches. It has a color touchscreen cased in aerospace-grade aluminum that’s paired with a rubbery band. Buyers can pick from three color options: blue gray with silver, burnt orange with slate blue or charcoal with graphite gray. The color pallets were inspired by space travel and its impact on pop culture, says Jonah Baker, Fitbit’s design chief. Fitbit also claims the Ionic’s battery should last for four days, which is considerably longer than the barely-day-worthy Apple Watch. On the flip side, it can store just 2.5GB of music, while other smartwatches offer considerably more space.

Read more: A ‘Smart Headset’ War Between Microsoft and Google Could Revolutionize the Workplace

Fitbit is also rolling out its first-ever pair of headphones, called Fitbit Flyers. They’re Bluetooth earbuds with passive noise isolation and buttons for controlling music playback and answering phone calls, and they’ll also be available in October for $129.

The Ionic’s challenge at this point is both to distinguish itself from and stay ahead of rivals like Apple and China-based electronics front runner Xiaomi. The latter two companies were neck and neck for most wearable devices shipped worldwide, pushing Fitbit to third place in June. [Update: A more recent Strategy Analytics report puts Fitbit in second place for overall marketshare after Xiaomi and ahead of Apple per the second quarter of 2017.] Both firms have distinct advantages over Fitbit, too. As Apple has improved the Apple Watch’s hardware and software, adding features like built-in GPS, swim tracking and a way to share data with friends, it’s become a formidable opponent in the fitness tracker space. Apple’s presence in the smartphone market has also given it a huge app ecosystem lead. Xiaomi’s appeal by contrast is in its value — the company’s Mi Band fitness tracker costs just $15.

Fitbit CEO James Park seems unfazed by any of that, highlighting his company’s history as a health researcher, and the fact that Fitbit products work on both iOS and Android, giving Fitbit an edge over Apple. “[Apple] started off the life of the Apple Watch thinking of it as kind of a computer on the wrist,” he says. “And they’ve shifted their position over time. It’s clear both of us feel that health and fitness is the killer app for this category.” 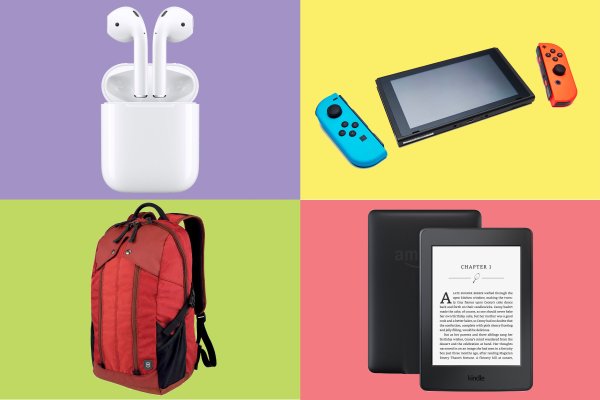 Gadgets That Every Student Needs
Next Up: Editor's Pick