Before she landed on the 34th annual MTV VMAs stage in her spacesuit, this year’s host of the MTV VMAs host, Katy Perry said: “When I do speak, it does get me into trouble. I’m looking forward to all the trouble I’m getting into tonight.”

In a politically charged climate like this, it was certainly bound to be an emotional ride for any host holding court. Perry opted to take us to outer space but rocketed ahead to out-of-touch jokes that didn’t always land.

That aside, the official ceremony honoring the best in music videos had plenty of performances worth watching. Any awards show that gives you Kendrick Lamar setting a guy on fire, Jared Leto premiering “new technology,” and Pink riding around in cars, is a fun Sunday night.

In between lighter moments, things got serious. Artists like Logic and Khalid joined to make a powerful statement on suicide prevention. And in the wake of Charlottesville, MTV also gave the stage to Heather Heyer’s mother Susan Bro to honor her daughter and announce her foundation.

Here were the best and worst moments of the 34th annual MTV VMAs.

Kendrick Lamar broke his losing streak by dominating the festivities with six wins for his socially conscious rap, proving as humble as ever when he accepted his award for video of the year with a shout out to the kids. Not to mention his show opener “DNA” followed by “Humble,” which gave everyone one of the most memorable visuals of the night. DNCE and Rod Stewart and Ed Sheeran did fire too. But no one featured a man on fire like Kendrick’s performance did.

Lorde: The flu-stricken onion ring reviewer delivered a dance along to her song that was as free as it was meme-able, and the Internet thanked her for it.

Pink: Nostalgia was in the air when the winner of the Vanguard award cruised through her considerbale backlog of hits. Whether she was leading a battalion of women brandishing toy chainsaws or belting out anthems like “What About Us,” she killed. She capped it all off with a heartfelt speech about self-acceptance praising Michael Jackson and David Bowie for rejecting gender norms.

Nicki Minaj: pulling a Nicki Minaj and nailing the verse on Katy Perry’s “Swish Swish” in the final splashy sendoff.

Taylor Swift: Even if she didn’t show up in the flesh, the Redemption singer addressed her own headlines by premiering her long-awaited music video “Look What You Made Me Do.” The video had an amalgam of Taylor’s past selves that split the internet. Wherever you stood, it was appropriately on-theme for the VMAs.

Thirty Seconds to Mars: The brightly colorful light effects on Jared Leto and company for their performance of “Walk on Water” wasn’t exactly new technology as advertised, but we hadn’t seen a show like it before.

Susan Bro: The awards show was so committed to honoring art with an activist bent that everyone nominated for the Best Fight Against the System award won — Notably, Susan Bro, the mother of Heather Heyer who was killed in Charlottesville. She announced the award, and her new foundation, with a courageous and powerful speech.

Paris Jackson: Her call for unity fell flat when she impersonated President Donald Trump and made the point that its impact would be “huge.”

Katy Perry: She reacted to Pink’s career-spanning performance with an ill-advised bit that didn’t seem to jibe with her recent atonement for cultural appropriation.

Jack Antonoff: In a likely pre-planned move (who brings fruit to the show?) the VMA winner did his best to be your new favorite meme by eating a banana and looking around during Katy Perry’s speech. Organic or not, it worked.

Fifth Harmony: Before the crowd favorite did what it does best with some impressive choreography, they referenced their new four-member lineup with a very on-the-nose visual stunt. Good thing they more than made up for it by hitting those moves. 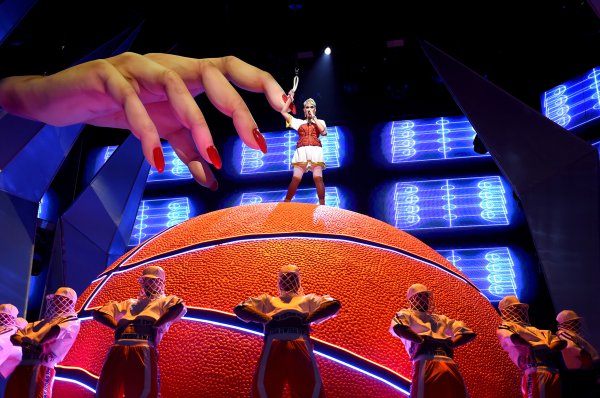 Watch Katy Perry and Nicki Minaj Ball Out at the VMAs
Next Up: Editor's Pick