Watchdog: Steven Mnuchin and Wife May Have Used Government Plane to Watch the Eclipse

Steven Mnuchin and his wife Louise Linton watch as President Donald Trump speaks during Mnuchin's swearing-in ceremony as Treasury Secretary in the Oval Office of the White House on Febr. 13, 2017 in Washington, DC.
MANDEL NGAN—AFP/Getty Images
By Abigail Abrams

Watchdog group Citizens for Responsibility and Ethics in Washington (CREW) has requested government records about the costs and purpose of Treasury Secretary Steven Mnuchin’s trip to Lexington, Ky. during the solar eclipse on Monday.

The trip caused a week of controversy for the couple after Linton sparked an online frenzy by posting a photo on Instagram with hashtags touting various designer brands. Then an Instagram user criticized her, saying: “Glad we could pay for your little getaway. #deplorable.” Linton lashed out at the commenter, calling her “adorably out of touch” and saying she and her husband paid more taxes and sacrificed more than the woman.

Linton later apologized, but the woman she criticized, Jennifer Miller, wrote an op-ed Wednesday on CNN, saying Linton was the one who was out of touch. “I don’t think she has any idea what everyday Americans deal with, especially when it comes to economic struggles,” Miller wrote.

Now, CREW is suggesting Mnuchin and Linton’s trip — during which Mnuchin spoke at an event with Senate Majority Leader Mitch McConnell — may have been planned to allow them to view the eclipse rather than strictly for government business. The group filed a Freedom of Information Act request for “copies of all records concerning authorization for and the costs of Treasury Secretary Steven Mnuchin’s use of a government plane to travel to Lexington, Kentucky on Monday, August 21, accompanied by his wife Louise Linton.”

CREW also requested all records relating to authorization and costs for any use of a government plane since Mnuchin was appointed as Treasury Secretary.

“The requested records would shed light on the justification for Secretary Mnuchin’s use of a government plane, rather than a commercial flight, for a trip that seems to have been planned around the solar eclipse and to enable the Secretary to secure a viewpoint in the path of the eclipse’s totality,” CREW said on its website. “At a time of expected deep cuts to the federal budget, the taxpayers have a significant interest in learning the extent to which Secretary Mnuchin has used government planes for travel in lieu of commercial planes, and the justification for that use.” 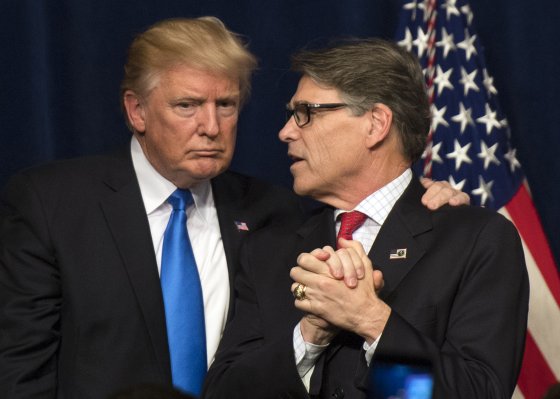 Rick Perry Wanted to Prove the Obama Administration Killed Coal. But the Facts Got in the Way
Next Up: Editor's Pick