Tig Notaro, the comedian and creator and star of Amazon’s One Mississippi talks about using humor to cope with personal tragedy, and how the entertainment industry can do better by everyone.

TIME: On your semi-autobiographical comedy One Mississippi, you’ve dealt with complex issues surrounding death and mortality, and personal loss. How do you see the relationship between personal tragedy and humor?

They go hand and hand. It’s hard for me to imagine digesting everything without a comedic release. That’s what I use to cope. It’s crucial for my peace of mind.

You were a class clown who dropped out of school. Is being an acclaimed comedian like getting the last laugh?

Yes, I failed three grades and then I dropped out, but my time in school was me preparing for my future career as a comedian, so it wasn’t time wasted. I still relate to that class clown who was like ‘get me the hell out of here,’ but I think teachers had a love-hate relationship with me, and I did pretty well as a comedian there.

What does the current standup boom mean for comedy?

It mixes things up. Some people are getting paid millions of dollars and then their special bombs and somebody sneaks out the most brilliant special. Consistently, Maria Bamford is a huge favorite of mine. I don’t know what she’s getting paid, but it makes you realize you have to be looking for what’s actually good, not what’s being pushed in your face.

Your show returns to your home state in a tumultuous political climate. What does being a Southerner mean right now?

That I come from an aesthetically beautiful place with a dark reality, so I hope for change. I hope to be an influence on this really dark place with a show that takes place in the Deep South with a lead character who’s openly gay. As a touring comedian, I’m really going through America to get a taste of the world. People are safely lodged in their bubbles, but stupidity, craziness, and desperation have always been there.

Do you think the South has changed in your lifetime, or do recent events make it feel like we’re going backwards?

Stephanie and I got married in Mississippi right when it became legal and it felt so exciting. I was blown away when the local police shut down the highway and on the way from our beach reception; you could see traffic lined up for miles in both directions. It felt like progress. I definitely have seen change, but I’d be foolish to think that there’s not so far to go.

If you could meet Donald Trump and tell him one thing, what would it be?

Everything we shared on the show was based on somebody’s truth or someone we have spoken to. Our writer’s room is 100% women and we really wanted to walk people through how horrific this is. You don’t have to be touched or even spoken to be assaulted by somebody. That’s what this scene shows, and it can come from anybody.

Louis C.K. is credited as an executive producer on One Mississippi. Regarding allegations of sexual misconduct by Louis C.K., from Roseanne Barr as well as anonymous sources, you recently said, “I think it’s important to take care of that, to handle that, because it’s serious to be assaulted.” How does one handle this?

Well I think that if somebody is assaulting people, I feel that they need to get professional help. I think they also need to certainly acknowledge this to their victims. I think that’s a good place to start. If you’re struggling with any sort of problem as serious as assault, it’s helpful to talk to somebody and turn things around because the behavior needs to stop, and it seems like when things are unchecked, it doesn’t stop. (Louis C.K. did not immediately respond to TIME’s request for comment. In a 2016 interview with Vulture, he addressed the anonymous allegations reported by Gawker: “That’s not real… There’s one more thing I want to say about this, and it’s important: If you need your public profile to be all positive, you’re sick in the head. I do the work I do, and what happens next I can’t look after. So my thing is that I try to speak to the work whenever I can. Just to the work and not to my life.”)

When did this happen to you?

I’m sorry. How did you react?

I was just stunned.

You talked about how it can be “anybody.” Was this person someone you worked with?

Did you continue working with this person after the incident?

Yes, it was uncomfortable.

What did you do to cope?

I think it was typical, talking to girlfriends, and I’ve been in therapy for years to just have somebody to talk to about life.

Are there specific ways the entertainment industry can do better by women?

Definitely, obviously having more opportunities and equal pay. With stand up comedy shows, when it’s an all-female lineup, there’s some ridiculous title like “ladies of the night.” Why does it have to be called that? Why can’t it just be comedy? I feel like that’s disrespectful in its own way and unnecessary. I haven’t been on those shows anymore because it’s usually my own show or with friends and we’d never call it something sexist like that.

Anyone you think is paving the way forward?

I’m always impressed by Sarah Silverman. I’ve had the luxury of being her friend for 15 years, and the way she presents her projects and takes on hard issues is admirable. She puts it all behind her.

Do you think your shows help people open up?

There was a guy in Birmingham whose wife bought tickets to my show before she passed away from breast cancer. The day after she was buried, he came in honor of her and left the seat next to him empty. I was so blown away, after my set, I asked the audience to support him, and it was such an empowering moment for everybody. It’s important for people to communicate about these topics.

How does the response to your projects shape your perspective on who your work reaches?

After having a double mastectomy and letting other people see what this looks like, I saw people immediately responding. A man who said this doesn’t even affect him said, “this speaks to me.” Male, female, cancer, no cancer, scars, no scars. It’s just about being comfortable with yourself.

And you’ve had success as a queer woman and cancer survivor. What do you think of the pigeonholing the entertainment industry so often does with identity?

I don’t consider myself a female comedian or a cancer comedian or a gay comedian, or even an alternative comedian. It’s like when people accidentally call me “sir” in public, I don’t even care. They can call me a choo-choo train.

But don’t you wish people would just call you a comedian? 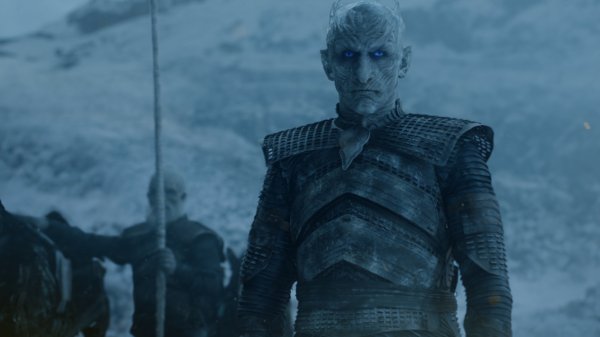 Celebrate Game of Thrones' Season 7 Finale by Turning Yourself Into the Night King on Facebook
Next Up: Editor's Pick