Are Hotels Spying On You? Here’s the Truth

If you’ve ever walked into a hotel room and wondered if you’re being watched, you’re not alone.

Whether it’s an idle question or a gnawing paranoia, many Americans have considered whether hotels are spying on their guests in the digital age. The answer is generally no, since that would violate laws in more than a dozen states. But the issue is complicated on a federal level, and security experts also say rogue hotel employees could easily hide small cameras inside devices, like clocks and lamps.

“Assuming someone has access to the room before and after the customer uses it, I think it’s quite easy because there are many devices available to the public that can be inserted into a room and retrieved after,” said Christopher Falkenberg, president of Insite Risk Management, a security-consulting firm.

“It’s not high-speed stuff, and it’s not hard to get,” added Falkenberg, who is a former U.S. Secret Service special agent. “If someone is targeted, that would be easy to do.”

However, the chance of that actually happening is slim, according to several surveillance experts, especially for guests who are not high-profile people like celebrities or politicians. Public figures are more likely to be targeted for intimate photos. There’s little to no value in spying on ordinary travelers, and hotel companies would likely not put their reputations at risk in surveilling guests, the experts say.

“In the U.S., there is no hotel or management company of hotels that would ever subject themselves to the massive liabilities of putting surveillance cameras in an actual hotel room,” said Todd Morris, founder and CEO of BrickHouse Security, which develops and sells security devices, like hidden cameras and alarms.

Cameras can usually be found in common and shared areas in hotels — like lobbies, hallways and pool areas. The American Hotel and Lodging Association, which represents 80% of all franchise hotels, said security protocols in place at hotels call for the use of security cameras in public areas.

However, it is “not the practice of U.S. hotels to have cameras in guest rooms,” said Rosanna Maietta, a spokeswoman for the national trade group.

Under federal wiretapping statutes, it’s illegal in every state to audio record anybody without their knowledge, but there’s no federal law pertaining to hidden camera usage, according to Syracuse University law professor William Banks. Only about 13 states have made it illegal to install or use cameras in private places without authorization from recorded subjects, according to Sanchez and the Reporters Committee for Freedom of the Press. “This is obviously a really dynamic area of the law,” Banks said. “It’s a rapidly changing area of policy and law in states. It’s challenging for legislatures to keep up with the changes in technology — what you can do with your telephone or your gadget that’s hardly visible.”

A handful of incidents over the last few years have highlighted isolated invasions of privacy, including a controversy involving Fox sportscaster Erin Andrews. Last year, Andrews was awarded $55 million after she sued a stalker who secretly video recorded her naked in her hotel room by tampering with the door’s peephole.

Last September, a Pennsylvania woman said she found a camera inside the bathroom of a Virginia hotel room her family was staying in. “You never in a million years think something would happen like that, but it did,” the guest, Angela Wallace, told WPXI-TV at the time.

But most U.S. citizens have nothing to worry about, said Falkenberg, whose security company conducts hotel room sweeps for such hidden devices at the behest of some celebrity clients. “The risk is quite limited,” he said, adding that his company “fairly infrequently” finds anything disconcerting.

There are certain things nervous travelers can do on their own to possibly reduce the odds. When checking in, guests can suggest a room change as soon as one is assigned, in case the initial one has already been set up with any devices, Falkenberg said. “Try to introduce some randomness,” he said.

However, for hotel guests with legitimate suspicions, the best thing to do is alert hotel management and call the police. 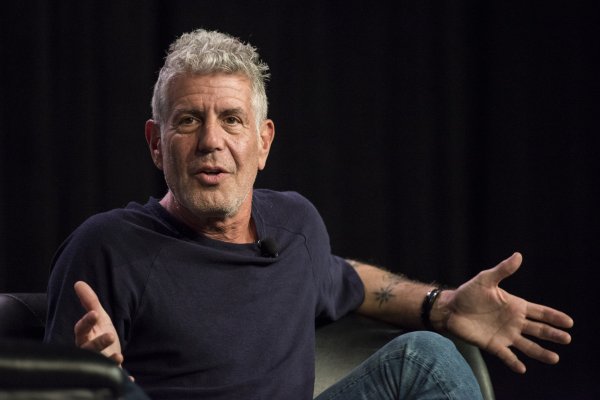 Anthony Bourdain Reveals the Most Annoying Thing You Can Do at the Airport
Next Up: Editor's Pick