For her new music video for the basketball-themed single “Swish Swish,” Katy Perry went all-out to collect an oddball group of guest stars that span the reaches of fame, from internet-viral superstars to a Game of Thrones actor and the comedy queen Molly Shannon. The Space Jam-inspired video dropped Thursday, marketed as a battle between the inept “Tigers” and the “Sheep.” In the game-time set-up, Perry and her squad — Stranger Things’ Gaten Matarazzo, Jenna Ushkowitz from Glee, the virally-dubbed “Backpack Kid” who stole the show at Saturday Night Live and more — face off against Game of Thrones actor Hafþór Júlíus “Thor” Björnsson, who plays the inimitable Mountain on the HBO show. Also spotted in the crowd: competitive eater Joey Chestnut, Rob Gronkowski of the Patriots and internet-famous Doug the Pug, among others.

Thanks to a halftime show from Nicki Minaj, Perry and her teammates manage to pull it together for the second half. As with much of Perry’s persona and Witness videos, “Swish Swish” ends in a frenzy of goofy antics and slapstick comedy. The whole six-minute film is stuffed with Easter egg details and meme-worthy moments.

The video was directed by Dave Meyers, who was also behind the highly-nominated video for Kendrick Lamar’s “HUMBLE.” This is definitely a different vibe — and online reaction was mixed.

Perry will next be taking to the stage as host of MTV’s Video Music Awards this Sunday before kicking off her Witness world tour this fall. 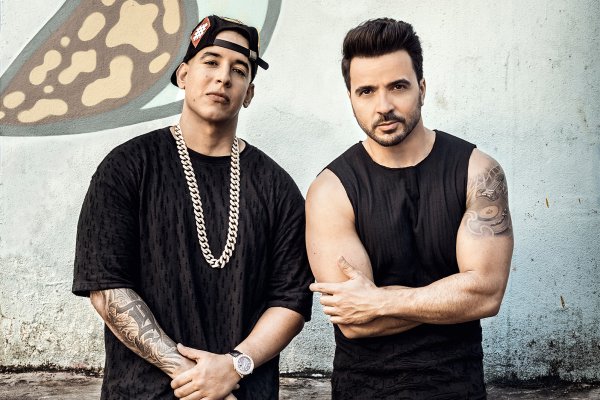 Here's How Luis Fonsi and Daddy Yankee Made a Truly Unstoppable Summer Jam
Next Up: Editor's Pick