Tony Fabrizio, a GOP strategist who worked for President Trump’s 2016 campaign, tweeted out a poll Wednesday arguing Donald Trump’s invincibility in the 2020 election — but the data he was showcasing told a different story.

The poll, conducted by Fabrizio’s firm, Fabrizio, Lee and Associates, showed that if a Republican presidential primary were held today, just 50% of the GOP would be most likely to vote for Donald Trump. The poll found that 26% would choose among four other candidates.

Even though these results technically show that 50% of the Republican Party wants someone other than Trump to run in a presidential primary, Fabrizio treated the results as welcome news of the President’s popularity, tweeting that he was “crushing” the primary field:

Among Trump’s hypothetical challengers, support was split. The poll found that 14% would most likely to vote for Texas Senator Ted Cruz, 10% would vote for Ohio Governor John Kasich — both of whom ran against Trump in the 2016 presidential primaries — and 1% would vote for either Nebraska Senator Ben Sasse or Arkansas Senator Tom Cotton. Not everyone could make up their minds: 24% were undecided.

Historically, sitting Presidents rarely face serious primary challenges when they are running for reelection, although such instances have occurred, most notably Senator Ted Kennedy’s insurgent run against Jimmy Carter in 1980. There is no indication Trump will not run; to the contrary, he has already filed paperwork laying the groundwork for the 2020 campaign. Trump has historically low approval ratings for this point in his tenure, according to multiple polls, leading some pundits to speculate he will face an intra-party challenge. Politico reported Tuesday, for example, that the Democratic National Committee is preparing opposition research on Kasich, Sasse, Vice President Mike Pence, and U.N. Ambassador Nikki Haley. Kasich recently denied that he plans to run in 2020, telling CNN’s Jake Tapper “I don’t have any plans to do anything like that.”

Polls this far out from a primary are notoriously unreliable. The survey was conducted among 1,500 voters who either described themselves as GOP or leaning GOP. The margin of error is 2.5 percentage points.

Fabrizio joined Trump’s campaign as pollster after working for Rand Paul in the 2016 presidential primaries, TIME reported in June 2016. After sparking a firestorm on political Twitter, Fabrizio posted a Gallup poll from September 2010 showing that Hillary Clinton with the support of 37% of Democrats in the 2012 primary, while Barack Obama had 52%.

Though a poll from a month later showed Obama with 64% support. 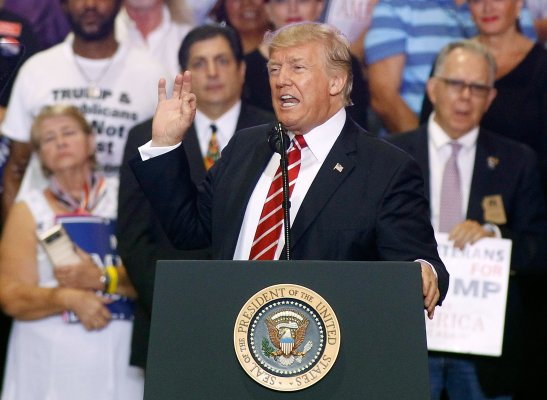 President Trump Ranted For 77 Minutes in Phoenix. Here’s What He Said
Next Up: Editor's Pick